An upgrade in some areas and a downgrade in others...

With Nvidia's 3GB Pascal series GPU, there is a common trend, they are not very similar to their standard counterparts of the same name, with their 3GB GTX 1060 offering fewer CUDA cores, making it in our eyes a product that should have released as a 1050 Ti class product.

To release with 3GB of VRAM capacity, Nvidia had to cut the memory bus of their GTX 1050 down from 128-bit to 96-bit, which cuts down the graphics card's memory bandwidth by a 25%, a downgrade when compared to the standard GTX 1050. Strangely, on the CUDA core and clock speed sides, the 1050 3GB is faster than the GTX 1050 Ti, with the same number of CUDA cores and higher base/boost clock speeds.

These specifications make the GTX 1050 3G a product that is neither a GTX 1050 or GT 1050 Ti, offering both advantages and disadvantages to create an extremely confusing product. It would have been nice for Nvidia to use 8Gbps GDDR5 memory to bump their memory bandwidth from 84GB/s to 96GB/s, which while still lower than the 112 GB/s offered by the standard GTX 1050, it would be a much smaller bandwidth downgrade for end users. 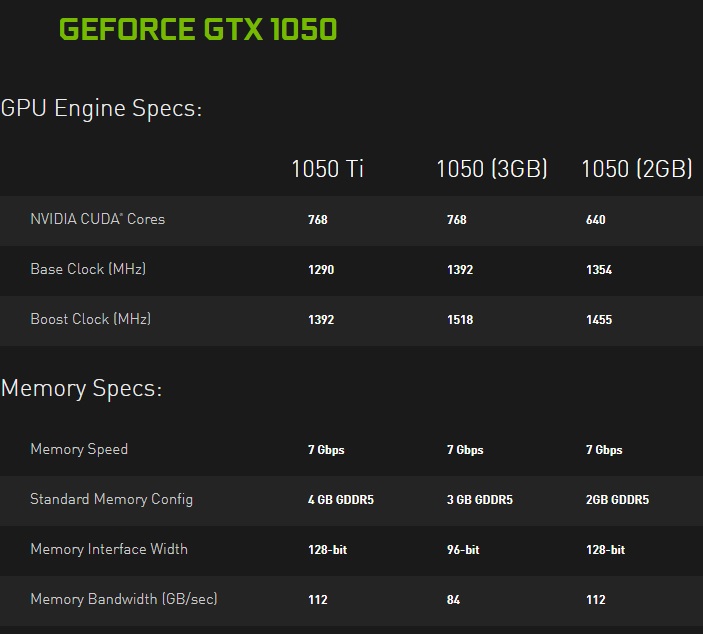 At this time it is unknown whether or not Nvidia plans to release their new 3GB GTX 1050 GPU, or if this graphics card will see a widespread release in the western market.

We are entering into an era where 2GB of VRAM is becoming too small for even low-end graphics cards in modern games, making us see why Nvidia would want to release a higher VRAM version of their GTX 1050 GPU.  Even so, a simple 4GB version of the GTX 1050 would have made a lot more sense from a branding perspective, as this new model will add a lot of confusion to Nvidia's already muddled Pascal GPU lineup.

You can join the discussion on Nvidia's GTX 1050 3GB GPU on the OC3D Forums.

AlienALX
It's a good idea though. 1050 2gb doesn't have enough and 1050ti has 4gb. So something in the middle is nice for the low end.Quote

g0ggles1994
I don't know why but that tiny FE cooler just makes me laugh. It's like a Chibi version of the full size FE cardQuote

AlienALX
Quote:
haha I really like it tbh. You could do a wicked tiny little rig with that in, and, looking at the specs it would be a very good card for 1080p. The Ti costs too much IMO and the 1050 doesn't quite cut it. So something in the middle, and in the middle with price will be the budget king. Well, unless you are super poor and can only afford a 1030.Quote

Daiyus
If somebody makes a low-profile version it would go into the list of contention to boost my HTPC's graphical power. I hear the Nvidia Linux drivers are pretty good too.Quote

NeverBackDown
Super annoying there naming scheme. They are not the same product and shouldn't be labeled as such.Quote
Reply