DLSS will be a transformative technology

At GTC Japan, Nvidia released two new marketing slides for their RTX 2080 and RTX 2080 Ti graphics cards, showcasing the relative performance of both graphics cards when compared to Nvidia's GTX 1080 and GTX 1080 Ti.

In the slide below, Nvidia claimed that their RTX 2080 is good enough for 4K 60FPS gameplay, placing their RTX 2080 above their GTX 1080 Ti in terms of raw performance, with the company's RTX 2080 Ti delivering even higher performance levels.

Looking at the slide Nvidia compares the performance jump between GTX 10 series and the RTX 20 series as being similar to the performance leap when moving between the GTX 9 and GTX 10 series', a significant performance uptick even without the use of RTX features like Ray Tracing and DLSS (Deep Learning Super Sampling). The only issue here is that Nvidia's new 20 series products also ship with significantly higher MSRPs than their predecessors, a fact that is not considered in this "performance-centric" graph. 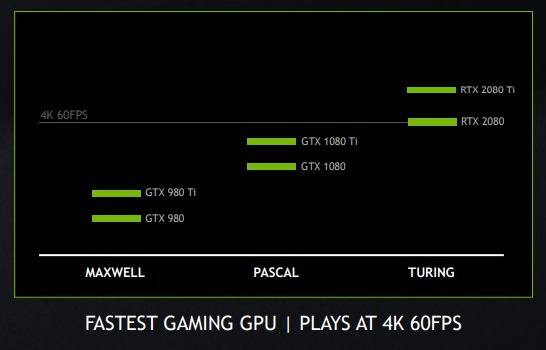 When Deep Learning Super Sampling is added into the mix, the performance gap between the RTX 20 series and the GTX 10 series gets significantly wider, delivering much higher performance levels.

So far, Nvidia has confirmed that DLSS will be added to 25 games, utilising Nvidia's AI performance to deliver similar levels of image quality to a native resolution presentation, but with significantly lower computational requirements, providing higher framerates. More information about DLSS and its supported games is available to read here. 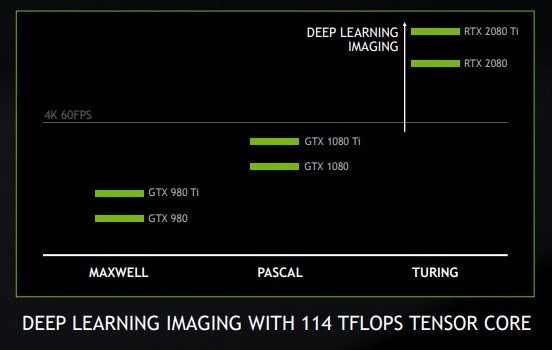 In the short term, Nvidia's DLSS technology is likely to have a greater impact on the gaming market than Ray Tracing, offering gamers higher performance levels without a noticeable degradation in image quality. This makes DLSS a "free" performance upgrade for supported games, assuming that the technology works as well as Nvidia claims.

You can join the discussion on the performance of Nvidia's RTX 2080 and RTX 2080 Ti on the OC3D Forums.

Dawelio
Quote:
I think you forgot an ” ) ” in there somewhere...Quote

Cloudraker
This is yet another example of them being extremely vague and misleading. The 1080TI is more than capable of 4k 60 in a ton of modern AAA titles, and thats at a full range of settings. These graphs they seem to love to release without an real numbers or settings information only make me wonder what they are hiding. Ill wait until i see reviews from sites i trust, like OC3D and others before i buy any more of their hype.Quote

rickyjb
With the reviews most likely coming out next week it does seem odd they have shown no real performance numbers.
I wonder it was a strategy not to impact 10 series sales.
I've seen a lot of people saying they would not buy a 20 series due to performance and price, how they were just going to get a 10 series instead.

Or its because people will expect to see a bigger gap for the price jump .Quote

Peace Đ
Wasn't the 1080 pretty much on par with the 980 Ti when it released? oO
I know, drivers, but this seems weird.Quote
Reply