Moore's Law has been showing down for quite some time, with progress towards next generation processing nodes slowing down while hardware makers and consumers cry out for bigger and more powerful hardware.

Today companies are searching for ways to boost the performance of their products without the need for more advanced processing nodes or creating products that are almost unfeasible in scale. If hardware makers want to create bigger products moving forward they will need to think of a new way of scaling silicon to larger sizes, which is where technologies like AMD's Infinity Fabric come into play.

Nvidia also wants to scale their products beyond the limits of silicon, with the company now researching ways to create GPUs that are a multi-GPU complex that will be able to act as a single unit and produce levels of performance that are higher than a single, "monolithic" GPU structure.

In a new collaboration between Nvidia, Arizona State University, the University of Texas and the Barcelona Supercomputing Centre, research is being conducted to create a GPU that is an MCM (Multi-Chip-Module), which can work together with fast interconnects to function as a single, grand scale GPU design.

The advantages of an MCM are obvious, as it will allow Nvidia to scale beyond the limits of traditional silicon and create several GPU SKUs using the same building blocks. These individual components will be smaller and high-yield, which will also make the creation process of these new GPUs less wasteful and potentially more profitable.

Right now, Nvidia thinks that an MCM-GPU would be able to produce performance levels that are within 10% of a hypothetical superscale-GPU with the same number of CUDA cores and memory bandwidth, a GPU that would be unbuildable without MCM technology.

To address this need, in this paper we demonstrate that package-level integration of multiple GPU modules to build larger logical GPUs can enable continuous performance scaling beyond Moore's law. Specifically, we propose partitioning GPUs into easily manufacturable basic GPU Modules (GPMs), and integrating them on package using high bandwidth and power efficient signaling technologies. We lay out the details and evaluate the feasibility of a basic Multi-Chip-Module GPU (MCM-GPU) design. 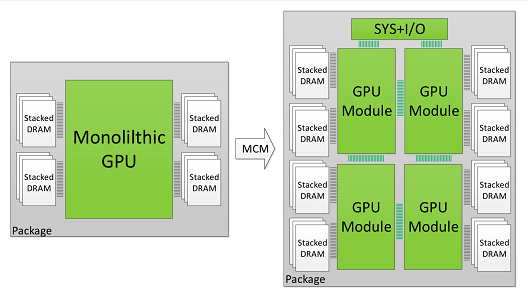 Those of us who are well acquainted with the PC industry will be scratching their heads thinking "this sounds familiar", as this research from Nvidia does seem reminiscent of AMD's Infinity Fabric tech which allows AMD to create MCM-CPU complexes for their Threadripper and EPYC series CPUs.

AMD has also implemented Infinity Fabric into their latest Vega GPU architecture, with their next-generation Navi-GPU hardware promising enhanced "Scalability", which suggests that AMD is ahead of Nvidia when it comes to creating an MCM-GPU.

You can join the discussion on Nvidia's plans to create a multi-chip GPU complex on the OC3D Forums.

NeverBackDown
AMD is easily ahead of the MCM design. I don't think you need to suggest that

They've done it on CPUs and GPUs (less of an extent here) and are much better (experience wise) at designing custom solutions. However AMD is still behind so Nvidia have time, probably nothing to be worried about tbhQuote

Radioman
success has many fathers, failure is an orphanQuote

Dicehunter
Quote:
Man who go to bed with itchy butt wake up with smelly finger.Quote

AlienALX
TBH we should have done this when Crossfire and SLi first arrived. We know now that scaling is good (up to 100% on Crossfire) so why we still have single cored GPUs is a mystery, when we now have like 40 core CPUs.

Having said that I don't think Nvidia have much of a choice. Navi works the same way, and Navi will inevitably end up in the consoles so the games will go in that direction with or without Nvidia.

The only thing that kinda annoys me is that these will be tiny little dies which are five and ten a penny to make, yet I know they will find a way to big it up and make it sound incredible and charge the earth for it.

It was a cracking idea by AMD, that's for certain. They are frugal with stuff like this and not wasteful, so the more working dies you get per wafer the less you lose.Quote
Reply