2018 is the year of Ray Tracing, with both AMD and Nvidia making a big deal of the technology in both the production and gaming markets, with Nvidia pushing the technology particularly hard through their Volta exclusive RTX technology.

Most of the focus on Ray Tracing in the gaming market came from Microsoft's DirectX 12 DXR (DirectX Raytracing) API extension. Every graphics card with DX12 support can use DXR Ray Tracing, though Nvidia's RTX ray tracing acceleration technique is exclusive to the company's Volta architecture at the time of writing. Ray Tracing is a complex and compute-intensive process, making it difficult on even today's most powerful hardware.

At GDC 2018 both AMD and Nvidia expressed interest in adding Ray Tracing support to Vulkan, with Nvidia working on a new VK_NV_raytracing extension to fit into the Vulkan API.  Nvidia has also stated that they are "fully committed to working with Khronos on multi-vendor standardization" and seek a "Similar structure to Microsoft’s DXR" to allow both DirectX 12 and Vulkan to function similarly.

It is easy to see why Nvidia wants a similar structure to Microsoft's DXR technology, which already supports Nvidia's RTX ray tracing acceleration technology, though alignment in this regard would make game development a lot easier across both APIs. 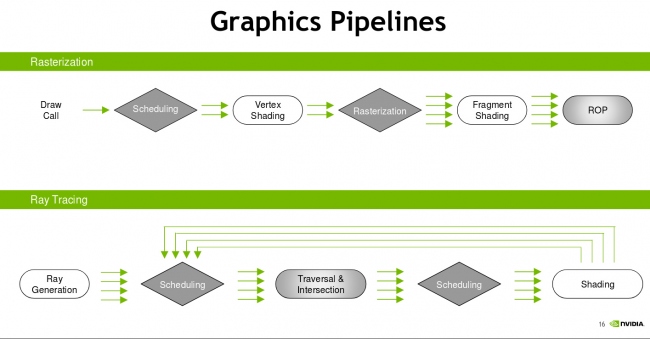 You can join the discussion on Nvidia's efforts to bring Ray Tracing to the Vulkan API through a new extension on the OC3D Forums.