On the 5th of January CES 2017 will begin and with it will come a huge number of announcements from every major player in the PC scene, be it AMD, Nvidia, Intel and countless PC vendors.
Nvidia has today announced that they will have something to show on the first day of CES, stating that they are "setting the stage for something big".
At this time it has been long rumoured that the company will be announcing mobile versions of their GTX 1050 and 1050 Ti at the event, though the company may have more GPUs up their sleeve, with many people expecting Nvidia to officially announce their GTX 1080Ti. 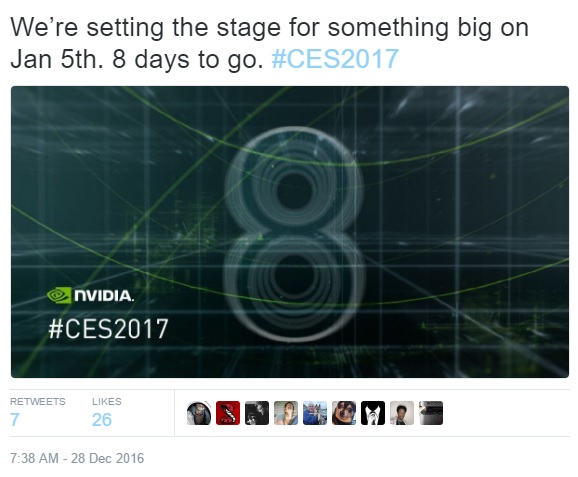 What do you think Nvidia will announce at CES 2017? You can join the discussion on Nvidia'sprescence at CES 2017 on the OC3D Forums.

Avet
I think it will be 1080 Ti. Nvidia is probably going to release it before Vega, and stabilize itself on the market. Hype is big now before CES 2017. Perfect opportunity to grab the attention of reviewers and buyers, and to be the only big graphics card subject.Quote

NeverBackDown
Quote:
To bad the Ryzen launch will overshadow a 1080ti. I don't think it'll do much for Nvidia. ALL eyes are on AMD.Quote