Is this a test PCB for a future Geforce GPU?

At this time little is known about this graphics card aside from its twelve 8Gb GDDR6 memory modules, which are all created by Micron and have a part number of 8BA77 D9WCW, which means that these modules are designed to deliver 14Gbps speeds each, which over twelve chips on a 384-bit bus equate to a total memory bandwidth of around 672 GB/s.

We can also see that this graphics card PCB has an NVLink connection three 8-pin power connections, features which are not uncommon for test boards. This PCB will likely act as a testbed for future Tesla, Quadro and Geforce Graphics cards, with Nvidia's use of a 384-bit memory but pointing towards a GTX 1080 Ti replacement.

Note that this PCB doesn't guarantee that we will see a new 12GB Geforce graphics card from Nvidia anytime soon, as this is clearly a prototyping board and not anything close to a final product. 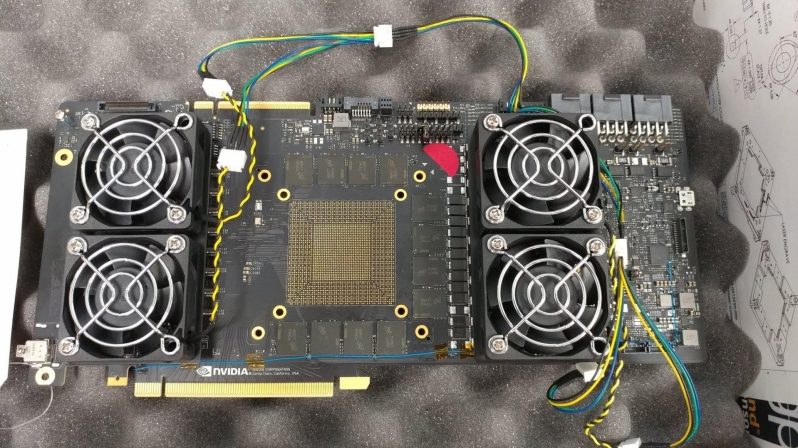 What is clear from this image is that Nvidia is building something with GDDR6 memory, though it offers no indication of when this prototype will result in a final product.

You can join the discussion on Nvidia's leaked Next-Gen GPU PCB with 12GB of GDDR6 memory on the OC3D Forums.

AngryGoldfish
With all these delays, I do wonder whether this will actually be more than just a 1080Ti replacement and more like the way the 1080 was a replacement to the 980Ti, as in a lot more powerful. To wait two and a half years for essentially a lower TDP version of the same GPU with only a slight price decrease would be... ehhhh... maddening.Quote


So its correct i thinkQuote

Also sod memory manufacturers. that GB Gb BS is such a crappy move.