Is Nvidia taking a leaf out of AMD's handbook?

With its RTX Super series of graphics cards, Nvidia has worked hard to make its Max-Q notebooks more powerful, efficient, and feature-rich than ever before. This means that several new technologies are moving under the Max-Q banner, ensuring better thermal/power management and enabling G-Sync on Optimus-enabled laptops for the first time.

For starters, Nvidia boasts its use of Low Voltage GDDR6 DRAM and "Next-Gen Regulator Efficiency", features which will help increase the power efficiency of Nvidia's Max-Q graphics card lineup. These small changes will help decrease the power requirements of some areas of their graphics hardware, energy which can be used to generate higher framerates when directed to Nvidia's graphics silicon.

When compared to Nvidia's first Max-Q enabled laptops, Nvidia has made some huge strides when it comes to power efficiency, all thanks to the hardware upgrades within the company's Turing architecture and the performance characteristics of the company's 12nm lithography. Even so, Nvidia's "double efficiency" claims are dubious, as they include Nvidia's use of DLSS in its calculations.

If Nvidia used like-for-like in-game settings or hadn't cherry-picked its game selection to enable DLSS or otherwise favour Turing, Nvidia would be unable to claim such an incredible advantage. Even so, it is hard to negate the potential impact of DLSS and other features on the hardware efficiency of future AAA games. 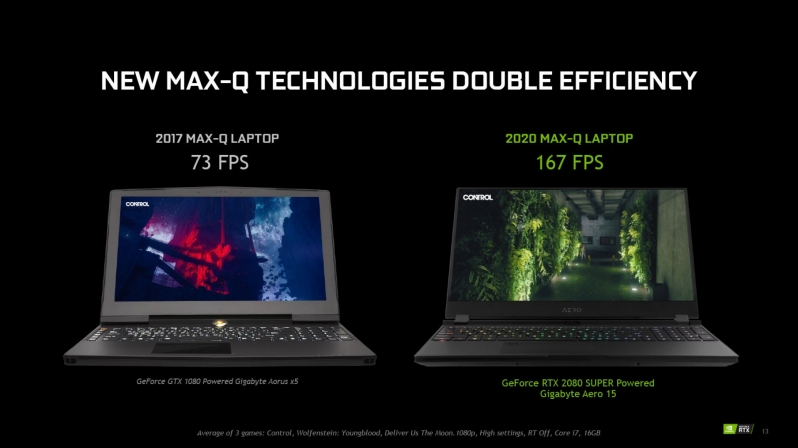 Before now, Nvidia's Optimus technology came with a considerable downside. It didn't support G-Sync. Now, Nvidia has jumped over this software hurdle, though at this time the company has been tight-lipped about how they addressed the issue.

Even so, the addition of G-Sync support to these gaming-oriented machines is a gamechanger for the company, making its Max-Q series of systems a lot more desirable for hardcore gamers. Until now, G-Sync enabled laptops required constant usage of Nvidia's graphics hardware, but now, Nvidia can benefit from the power-saving nature of Optimus and the gaming benefits of G-Sync within a single system. 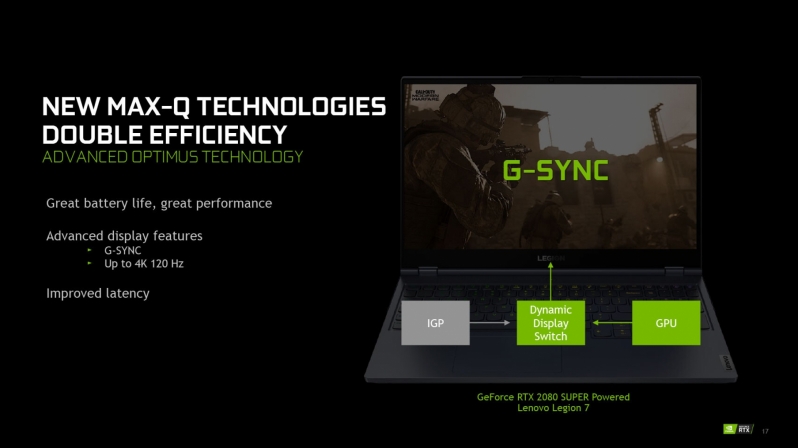 Nvidia Dynamic Boost - Taking a Leaf from the Radeon handbook

Essentially, AMD could give more power to its discrete graphics cards by taking power from their Central Processing Unit and vice-versa, enabling increased system performance while maintaining the same levels of power draw/heat output as before. Now, Nvidia has taken this solution and have created their own version called Nvidia Dynamic Boost, a solution which should work on systems with AMD or Intel processors.

Shared thermal solutions are often used on mobile systems with thin and light characteristics, taking advantage of the fact that most workloads won't place 100% stress on both the user's CPU and GPU. This allows both units to deliver high levels of peak performance, though this comes at the cost of sustained performance, especially when both the CPU and GPU are stressed. 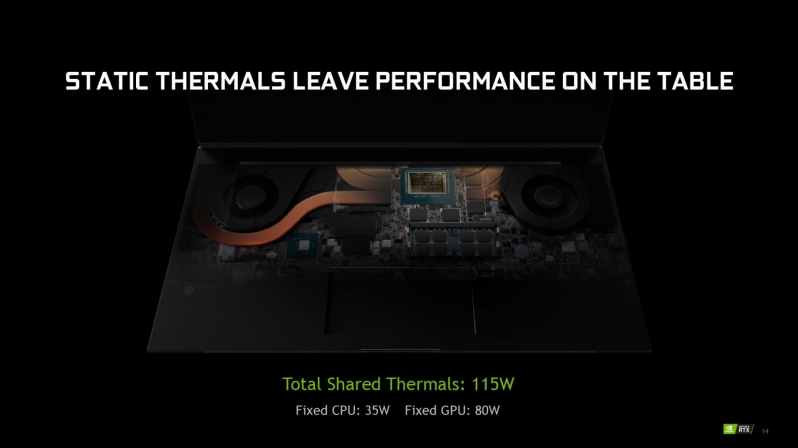 This concept isn't new, but it has mostly remained limited to systems with CPUs and integrated graphic solutions. Bringing this kind of feature to systems with processors and graphics hardware from different manufacturers is new, though it is worth noting that this feature is not mandatory for new Max-Q systems and requires the involvement of OEMs to integrate.

Aside from this, Nvidia's Dynamic Boost tech requires OEMs to utilise a shared cooling solution and to create their systems with the VRM headroom to accommodate the heightened power consumption of Nvidia's graphics hardware. This will make Dynamic Boost a difficult feature to implement, though Nvidia is no doubt helping its OEM partners to develop systems with this technology in mind. 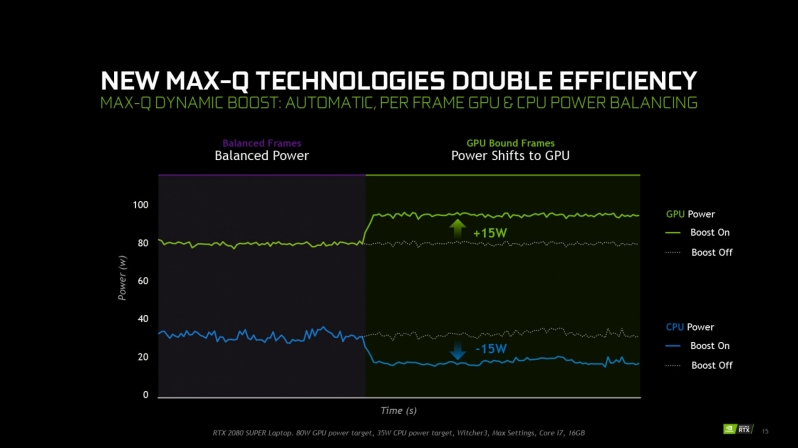 With their Dynamic Boost technology, Nvidia is promising performance gains as high as 10%, highlighting that many modern games are taxing on both CPU and graphics hardware. Performance gains are small, but they are more than worthwhile given the fact that it doesn't come with an increase in power consumption of heat production.

Nvidia's new Dynamic Boost technology isn't a mandatory part of the Max-Q standard, which means that new Max-Q notebooks are not guaranteed to support this feature. That said, creators of Max-Q notebooks have a lot to gain by supporting Dynamic Boost, as it will net them some handy performance and efficiency gains that their older notebook models lack.

Another factor that's worth noting is that Dynamic Boost cannot be patched into existing notebook designs, as notebooks need to be designed with the sensors and power tracking tools to make Dynamic Boost viable. 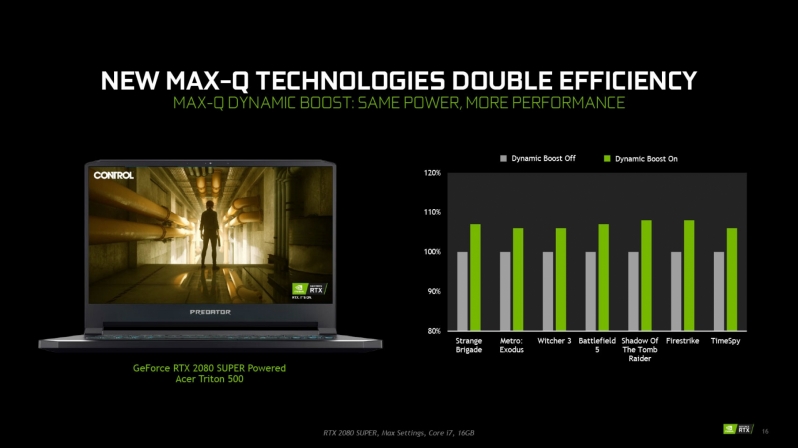 With its RTX Super Series, Nvidia's largest performance gains and feature upgrades can be seen in its Max-Q systems, where efficiency gains are maximised, and new features have been added. It will be interesting to see how Nvidia's Dynamic Boost technology works in action, and how many OEMs will support it in early RTX Super Max-Q systems.

You can join the discussion on Nvidia's boost to Max-Q efficiency on the OC3D Forums.