Nvidia's RTX 3060 graphics card is not due to release until February 25th, but that hasn't stopped cryptocurrency miners from accessing these soon-to-be-released graphics card.

On the Belarusian, second-hand marketplace Onliner (via Vidoecardz), several RTX 3060 Eagle OC graphics cards from Gigabyte have appeared, days before the graphics card's official release and at a price that is well above the GPU's MSRP. At a sale price of 28000 BYN, these GPUs were available for over $1,000 US.

These GPUs appearing at second-hand retailers before launch represents a tremendous failure for Nvidia and their AIB partners. These companies were unable to prevent these GPUs from being sold before their long before their official release date, and the pre-release sell-off was in large enough quantities that buyers had enough to sell off their extras.

The seller of these graphics cards was either a cryptocurrency miner who disliked Nvidia's Ethereum mining mitigations or a scalper who already planned to resell these GPUs for profit. We hope Nvidia and Gigabyte track these graphics cards and punish those who allowed them to be sold early. These graphics cards were sold before launch, breaking sales agreements while denying gamers the opportunity to purchase them at MSRP prices.

With pre-launch sales, an ineffective crypto-currency mining limiter (as it only works on Ethereum) and launch pricing that will likely be well above MSRP, Nvidia's RTX 3060 launch will likely be remembered as one of Nvidia's worst. Don't expect retail stocks to last for long on February 25th, as it looks like a lot of these GPUs have already been sold... 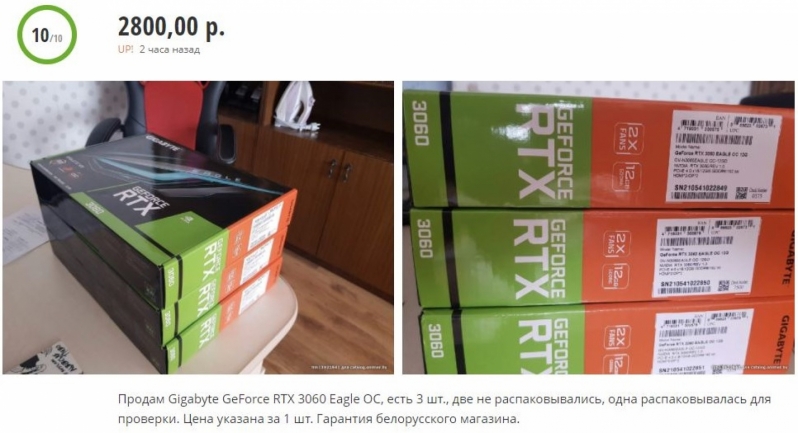 You can join the discussion on Nvidia losing control of the RTX 3060's launch date on the OC3D Forums.

tgrech
Pakistani stores had this different model (And a few others, not sure if the ones here are the same type) on sale a few weeks ago, inflated prices but not so inflated as so to be too unprofitable for miners.