An RTX Titan is in the works

It's official, Nvidia has a graphics card called the RTX Titan in the works, with the graphics cards "leaking" from multiple sources at around the same time, appearing on the Linus Tech Tips WAN show and in Gavin Free's (from The Slo Mo Guys) Instagram account.

The RTX Titan appears to offer users a similar PCB to the RTX 2080 Ti, likely shipping as an RTX 2080 Ti with full silicon utilisation, which means that it should provide more memory bandwidth, have access to more CUDA cores and have 12GB of GDDR6 memory.

In our opinion, the RTX Titan will basically be a Quadro RTX 8000 (with less VRAM), offering 256 more CUDA cores than the RTX 2080 Ti and offer full access to TU-102's 384-bit memory bus, rather than the constrained 352-bits that the RTX 2080 Ti offers. As a consequence of this, the RTX Titan will deliver around 9% more memory bandwidth and almost 6% more CUDA compute performance at the same clock speeds as an RTX 2080 Ti.

Alternatively, Nvidia could utilise higher-speed GDDR6 memory or offer a larger bank of VRAM to offer a 24GB capacity card, though such a large GPU would be unnecessary for the gaming market. 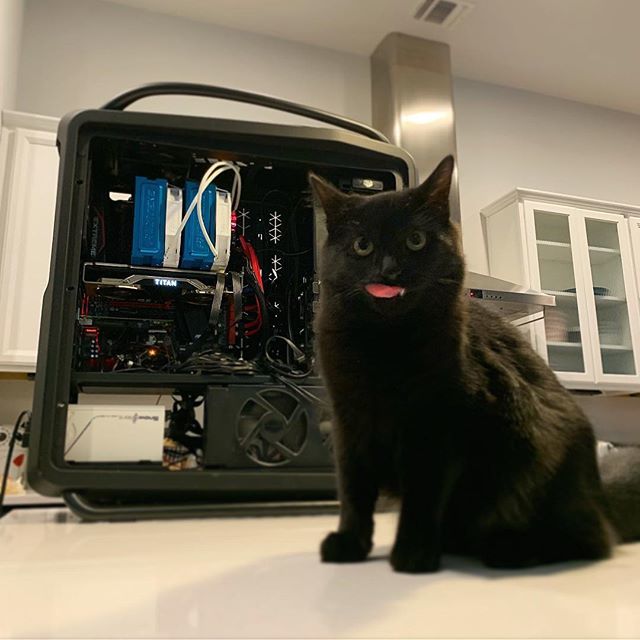 These "leaks" are likely a coordinated part of Nvidia's marketing efforts, suggesting that the company will officially reveal the graphics card soon. At this time the exact specifications and pricing of this graphics card remain unknown, though we can expect it to cost a lot more than a standard RTX 2080 Ti.

You can join the discussion on Nvidia's RTX Titan graphics card on the OC3D Forums.

AlienALX
That whole Linus gig was totally an "accidental on purpose" sorta thing.

IDK why but I find it quite exciting lmao. Given my history this will probably end up being my next card.Quote

AlienALX
Quote:
haha and the rest !!

RobM
Quote:
I was gonna go with 2 tbh but then though nah surely they can't be that greedy.

AlienALX
Quote:
Remind me again how much the TV cost?

lmao they're aholes they really are. They could have launched this first, then the 2080Ti. Instead whoever bought a Ti has been usurped within a couple of months and then Nvidia will launch a refresh next year in the exact same order.

You know though, this will eventually blow up in Nvidia's face. I know, because that exact thing happened to Apple recently, when they realised people just would not pay £1000 for a phone. They pushed, right to the limit, and it broke. Now they are stuck with loads of phones they have to discount to get rid of because people simply aren't buying them.

And that will happen here also. Every one has a limit, and those that don't can't afford to keep Nvidia in business alone.. There is a saying -

If all the rich people in the world divided up their money among themselves there wouldn't be enough to go around.Quote
Reply