Ready to game on RTX?

Purchasers of Nvidia's newly announced RTX 2060 and RTX 2070 will be able to redeem a copy of either Battlefield V or Anthem, with purchasers of the company's higher-end RTX 2080 or RTX 2080 Ti receiving both graphics cards. This offer will apply to complete systems as well as individual GPUs from selected retailers. Both mobile and desktop graphics cards are eligible for this offer.

This offer will be available from January 7th until March 25th, 2019, or when Nvidia's supply of game codes is exhausted. Both Battlefield V and Anthem support Nvidia RTX features, with Battlefield V supporting real-time ray tracing and DLSS (via a soon to be released patch) while Anthem supports DLSS.

Whether you’re knee-deep in the trenches of Battlefield V or soaring through alien skies in Anthem, NVIDIA GeForce RTX delivers the ultimate gaming experience. Triumph over adversity with the new NVIDIA Turing GPU architecture and the revolutionary RTX platform. Game on RTX. 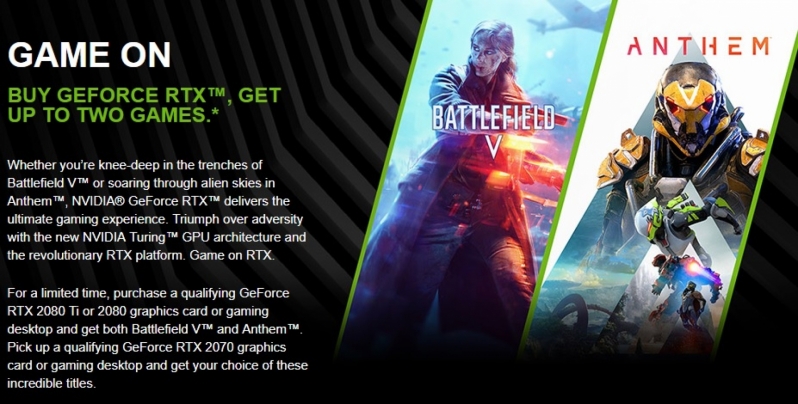 In the UK participating retailers include Overclockers UK, PC Specialist, Scan, Ebuyer, box.co.uk and Mesh Computers. A full list of retailers for each region is available on Nvidia's website. Terms and conditions for the promotion are available to read here.

You can join the discussion on Nvidia's "Game On" Bundle for RTX series graphics cards on the OC3D Forums.