Now, Nvidia has committed to bringing CUDA support to ARM before the end of the year, complete with a full stack of AI and HPC software, enabling ARM to be used to create the next generation of supercomputers. With this change, Nvidia will support all three leading CPU architectures, x86, POWER and ARM.

This announcement comes after the announcement of two Exascale supercomputers which are powered by the combination of CPU and graphics silicon from Intel and AMD respectively, which each system offering tight integration between their CPU and graphics products. Simply put, Intel knows how to get its CPUs working with its own graphics chips, and likewise, AMD knows how to get it's Zen CPUs and Radeon graphics to work together optimally.

From the looks of it, Nvidia is broadening its approach to supercomputing with hopes to increase sales, especially as the European Processor Initiative works to create an ARM-based supercomputer using European processors. Moving forward, ARM will become a larger name within the supercomputing space, and Nvidia hopes to ride on the coattails of that success.

Nvidia's bet is that more and more supercomputers will become energy-centred, making their plans to support ARM-based systems extremely logical given that architectures strengths. 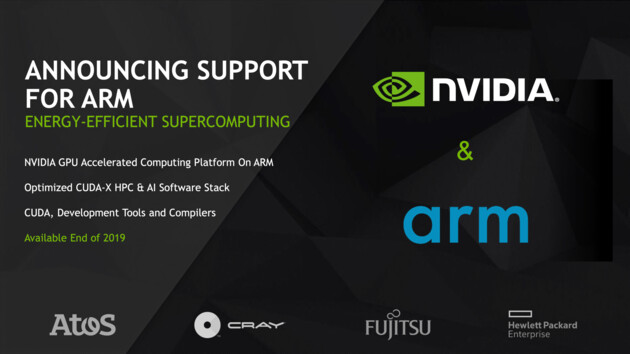 You can join the discussion on Nvidia's decision to bring CUDA to ARM on the OC3D Forums.

tgrech
To be fair a lot of these supercomputer wins are highly valued for their marketing appeal and so the hardware for them gets sold for pennies on the dollar when there's competition. Largest costs long term end up being power & cooling usually.Quote
Reply