Nvidia has reforged the mid-range market

The £200 segment of the graphics card market is usually where the best value is offered, granting PC gamers incredible levels of performance while maintaining an air of affordability.

Little movement has been made in this segment for the past number of years, with AMD's Polaris lineup and Nvidia's Pascal lineups holding strong within this section of the market for well over two years. Now, Nvidia hopes to shake things up, by injecting a little Turing into the mix.

Nvidia targets this graphics card at fans of Battle Royale games, hoping that it will be used with G-Sync, or G-Sync Compatible monitors to offer smooth gaming and low latency response times, utilising Nvidia's Turing architectural enhancements to excel in today's games as well as future titles.

Below are the full specifications of Nvidia's GTX 1660 graphics card, with Nvidia confirming that all models will feature an 8-pin PCIe power connector. Nvidia has also confirmed that no Founders Edition graphics cards will be available for the GTX 1660.

In the UK, pricing for the GTX 1660 will start at £199, which is how much some of today's cheapest GTX 1060 6GB graphics cards cost. With Nvidia's performance claims in mind, it is clear that the company hopes to deliver gamers increased price/performance levels with this launch, which is excellent news for the mid-range market. 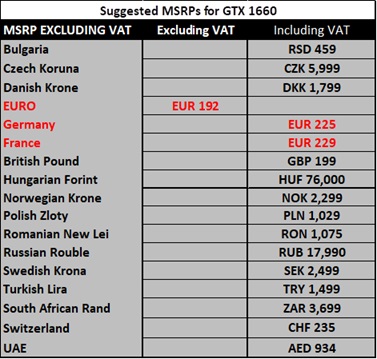 You can join the discussion on Nvidia's GTX 1660 graphics card on the OC3D Forum.