How well does Turing compare to Pascal without RTX technology?

Nvidia has finally released their first set of benchmarking data for their upcoming Turing series of graphics cards, revealing the performance of their RTX 2080 when compared to the company's last-generation GTX 1080 graphics card.

The company's slide below states that the RTX 2080 offers a 2x performance improvement over the GTX 1080, though this statement takes into account the performance benefits provided by DLSS (Deep Learning Super Sampling), an upscaling technique which uses the AI processing power of Turing to deliver more detailed images. At this time it is unknown if DLSS has any noticeable downsides over a native 4K pixel count, though Nvidia states that it offers image quality that is similar to 4K with TAA enabled.

In reality, without the aid of DLSS, Nvidia's examples showcase a 30-50% performance increase over Pascal at 4K resolutions, giving the RTX 2080 performance numbers that are in the same ball-park as the GTX 1080 Ti, at least in theory. Nvidia provided no performance data that compared the GTX 1080 Ti to the RTX 2080. It is also worth noting that Nvidia has not released any minimum framerate data. 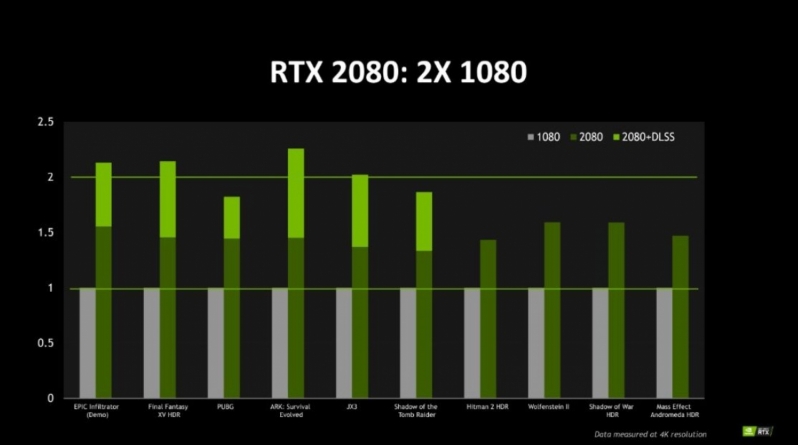 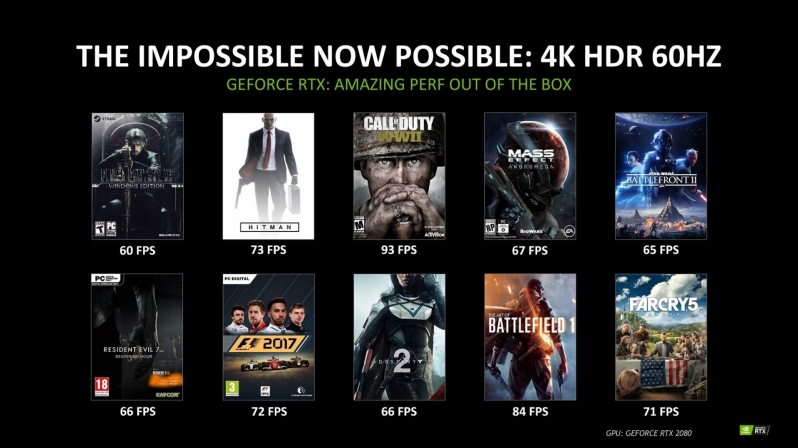 While this data leaves a lot to be desired, the information is useful, especially when looking at the performance benefits of DLSS. The technology enables roughly 30-40% more performance than a native 4K presentation, though at this time it is unknown how the feature impacts graphics quality.

In many ways, DLSS could be compared to checkerboarding and other resolution upscaling techniques on consoles, all of which present some form of graphical artefacts or shimmering. It remains to be seen how close to a native presentation DLSS is in practice.

You can join the discussion on Nvidia's RTX 2080 performance figures on the OC3D Forums.

AlienALX
Smoke and mirrors to me.Quote

TheF34RChannel
I'm all for independent reviews and suspect of those from manufacturers.

DLSS is enabled on the driver side for all games and not in the hardware or game dev side, correct?Quote

yairpatch
there is a mistake with the post, the second picture also talk about RTX 2080 and not 2080 Ti.Quote

AlienALX
Funny how we have had all of these "leaks" yet not one "leaker" decided to upload a Firestrike score like we always see every time a GPU is about to release.Quote

WYP
Quote:
It needs developer support. The DLSS tech is based on deep learning and therefore requires a lot of "hard truth" data to optimise the algorithm. IE, the feature likely needs to be implemented on a game-by-game basis.

For the sake of speed, DLSS would, in theory, work best when designed with specific games in mind. An accurate one-size-fits-all approach to DLSS would likely be too computationally intensive to be worth it.Quote
Reply