Wait, Surround support is Turing only?

With their Geforce 419.67 drivers, Nvidia has announced that two new monitors have been validated as G-Sync Compatible, with the manufacturer shedding more light on what it takes to create a G-Sync compatible monitor.

These two displays in question are ASUS' VG278QR and VG258, both of which are value-oriented 1080p screens, which offer refresh rates of up to 165Hz and 144Hz respectively.

Nvidia has also confirmed that Surround support is now possible with G-Sync Compatible monitors, something which was not possible on older drivers. Sadly, this support is restricted to Turing-powered graphics cards, and all displays must be connected to the user's primary graphics card (in SLI setups) via DisplayPort. Additionally, all three monitors must be identical, being the same make and model. The resolution of these displays must also be set as a surround resolution, such as 5780x1080 for a 3x 1080p setup.

When discussing Nvidia's G-Sync Compatible certification program, Nvidia confirmed that all G-Sync compatible displays must offer a variable refresh rate range of 2.4:1 and offer no blanking, flickering, ghosting or other artefacts during VRR gaming workloads. With Nvidia's VRR range requirements, 144Hz G-Sync Compatible monitors must provide a VRR range of 60-144Hz at a minimum.

On these validated displays there’s no blanking, pulsing, flickering, ghosting or other artificating during VRR gaming. And that they can operate in VRR at any game framerate by supporting a VRR range of at least 2.4:1 (e.g. 60Hz-144Hz), in addition to offering a seamless experience by enabling VRR by default when the driver is installed and the monitor plugged in. 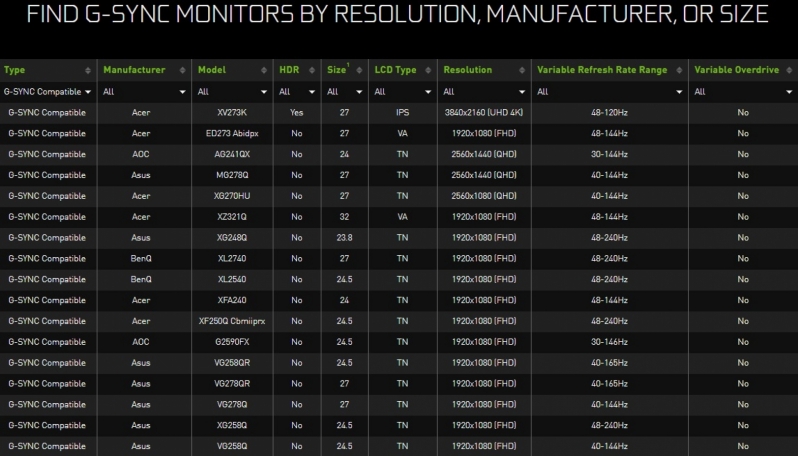 At this time it is unknown why G-Sync Compatible Surround is not functional on Nvidia's Pascal series graphics cards. Nvidia's driver release notes state that it only works on Turing series GPUs.

You can join the discussion on Nvidia's new G-Sync Compatible features and displays on the OC3D Forums.

Peace Đ
Wow, ASUS have immediately updated the VG258's product page listing GSync compatibility. This might be the perfect monitor for me and as a coincidence, it's my birthday soon, soooo :P


The part about surround confuses me a little bit: to enable GSync on ALL 3 monitors, they have to be the exact same, right? That doesn't mean, however, that I can only have GSync on on all or none, right? Meaning I can get that ASUS one and keep my other two oldschool Acers and GSync will still work on the ASUS, right? I doubt that I'd have to get an entire setup of new monitors, but I just wanted to get clearance.Quote

Warchild
long ago, if you had 3 identical monitors, with G sync enabled, it only applied to your main screen. Didnt matter if all three were Gsync monitors.
To expand on this, they added the Gsync surround feature which I believe allows the experience across all three

Peace Đ
Quote:
Exactly what I've been looking for, thank you!

Funnily enough, on Amazon the 27" variant costs 10Â€ less than the 25.5" model.Quote
Reply