We already know that the GTX 1060 will cost $249.99, but what is the price outside of the US? Thankfully Nvidia has responded to our query and given us a list of the MSRPs of the Nvidia GTX 1060 for a large number of nations and currencies, including the UK and EU.

This pricing is the minimum for the GTX 1060 6GB, meaning that this will be the price of lower end GTX 1060 GPUs, with overclocked models and premium GTX 1060 models being likely to cost more. 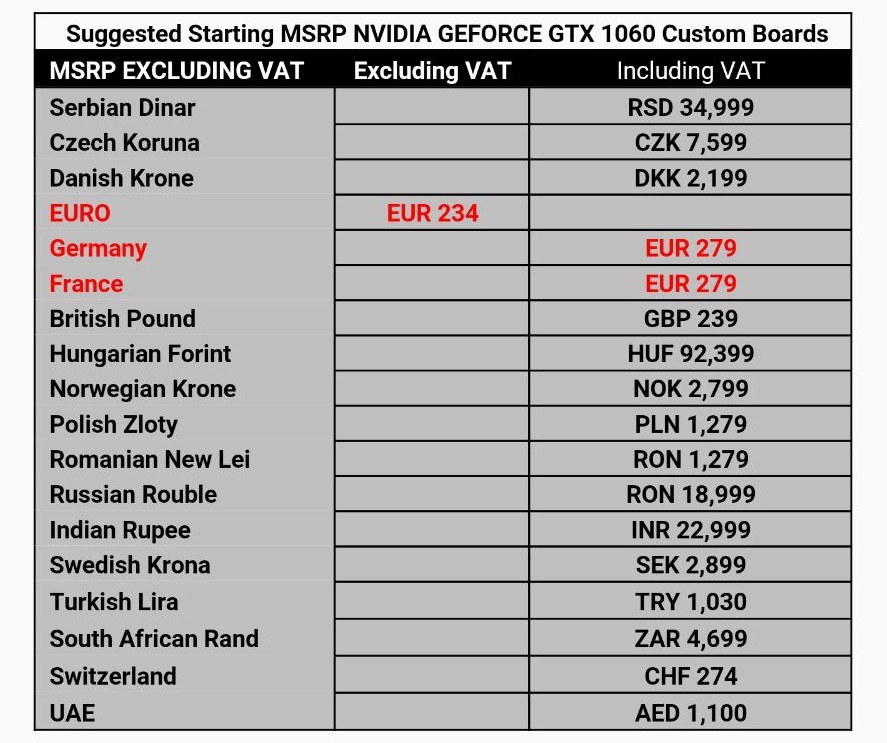 Nvidia has also confirmed to us that the GTX 1060 Founders Edition will be available in the UK, Germany, and France to purchase at nvidia.com for 319 Euros and £275 including VAT.

You can join the discussion on the GTX 1060's pricing on the OC3D Forums.

What is the price of the GTX 1060 outside the US? https://t.co/kVrEPKxmHC pic.twitter.com/LBKjbCYIY1

That's why we can't have nice things here :'(Quote

ricksavoie
You guys ever hear of a country called Canada? Why do I follow this website? Somehow NVIDIA has recognised us as a sovereign state since they jacked the price up here for 1070 and 1080's higher than anywhere else in the world.
I'm sure they'll do the same with the 1060.

AlienALX
Quote:
£286 for the FE confirmed.Quote

SpencerUk
Just to be clear, this is "from" so I'm assuming this is the 3GB card??Quote

SeekaX
Quote:
Quote:
279 for a 6GB card would be acceptable, 319 not really. My guess would be that we'll end up with ~295 on average for the cheaper acceptable cards, which might be worth it, depends on how much better the 1060 is over the 480. A reference 8GB 480 is 270 for comparison, probably ~280 for the aftermarket cards.Quote
Reply