Nvidia brings Integer Scaling to its drivers, but only for Turing

Nvidia brings Integer Scaling to its drivers, but only for Turing

Some games are designed to look blocky, be it an indie pixel art title or an emulated classic on a modern gaming PC. Sadly, these classic-style graphics are often misrepresented on today's high-resolution screens, where resolution scaling adds unnecessary blur or removes sharp pixel edges. This has only become more common in today's 4K era.

Earlier this year, Intel stated that it would support a feature called Integer Scaling, a method which allows classic games and pixel art graphics to be scaled to higher resolutions without losing any of the image's sharpness. a single pixel will be scaled to a block of 2x2 pixels, or 3x3 pixels or more, allowing games to look as they should, without the need for added blur or other upscaling artefacts. Unfortunately for Intel, revealing these plans have shown their plans to the competition, giving them a chance to offer the same features before Intel has a chance to hit the GPU market.

Today, Nvidia has revealed "Turing Integer Scaling", a seemingly Turing specific feature which allows Nvidia to offer integer scaling within games, preserving pixel edge details and the ultra-sharp presentation of classic and pixel art games. The images above showcase the benefits of Nvidia's new scaling feature, which allows games like FTL: Faster Than Light to look like the developer intended on a modern, high-resolution display.

Users of Nvidia's new Geforce 436.02 driver, and an Nvidia Turing or newer graphics card, can enable Integer Scaling as a beta feature within Nvidia's control panel. This enables clearer sharper images when used with specific games. This driver is now available to download. 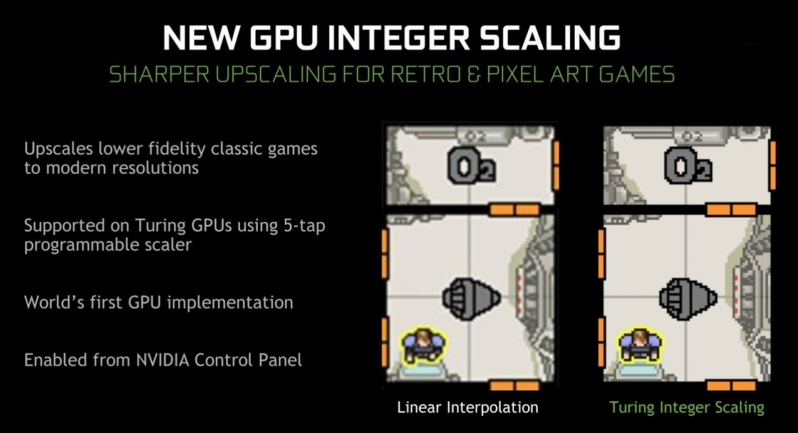 You can join the discussion on Nvidia adding support for GPU Integer Scaling to their drivers on the OC3D Forums.

It is as though Nvidia are so desperate to have something good they throw anything in.Quote

WYP
Quote:
It's because Intel said it was coming to their drivers with their 11th Gen graphics. It's a niche feature, but a welcome one.

Basically, Intel said it would happen to please Reddit, Nvidia saw that and them rushed it out to say "first". Intel knows the competition is coming, and they need to do what they can to appear to have the best software stack.

If you look at the rest of the announcement, Nvidia's other features are basically answering what AMD brought to the table with AMD anti-lag and Radeon Sharpening.Quote

NeverBackDown
Funny thing is Intel can do it on basic graphics while Nvidia needs the full power of their AI suite to power this.Quote

tgrech
I don't think this uses any AI tech(It's just a simple nearest-neighbour algorithm rather than bi-linear interpolation), its Turing exclusivity will likely be because they only added dedicated integer units and with them a concurrent integer datapath alongside the floating point one with Turing(While int32 performance in Pascal was about 1/3rd rate fp32 at best). On NVidia's original Turing architecture deep dive article they state in relation to integer instructions
Quote:
(So in a use case like this it would have to constantly context switch after each frame which had delays and some cache flushes on older NVidia archs, it's also possible they could use the Fused-Multiply-Add matrix instructions through the Tensor cores for an optimised k-nearest neighbour algorithm but that wouldn't be a requirement and would break GTX Turing compatibility)Quote
Reply