Nvidia abandons Intel with its DGX A100 systems - Adopts PCIe 4.0 and AMD EPYC

Nvidia needed PCIe 4.0 connectivity, and only AMD can offer that

Nvidia abandons Intel with its DGX A100 systems - Adopts PCIe 4.0 and AMD EPYC

Nvidia's DGX A100 is a computational powerhouse, offering eight of Nvidia's new A100 Tensor Core GPUs to deliver incredible levels of AI performance while offering the potential for performance to be expanded further with the addition of more DGX A100 systems.

The GDX A100 is Nvidia's first system to be connected over PCIe Gen4, a feature upgrade with doubles the potential bandwidth of the system. These links provide access to the system's NVMe storage, processors and Mellanox ConnectX-6 networking cards, each of which is vital components for Nvidia's latest DGX systems.

At the time of wiring, Intel offers no processors which support PCIe 4.0 connectivity, and this has forced Nvidia to abandon them. With this generation of DGX systems, Nvidia's backing AMD, choosing to utilise two of AMD's 64-core EPYC Rome processors.

When connecting this many graphics cards together, Nvidia needs access to insane levels of bandwidth. That's why Nvidia created its NVLink, and NVSwitch interconnects in the first place, but that doesn't mean that PCIe 4.0 isn't a massive upgrade for the DGX A100.

Each of Nvidia's DGX A100 systems utilises dual 1.92 TB NVMe M.2 SSDs as OS boot drives in a RAID 1 volume, and four 3.84 TB of PCIe Gen4 NVMe U.2 cache SSDs in a RAID 0 volume to offer storage capacities of 15 TB. Beyond that, an additional four U.2 SSDs can be added to provide a combined 30TB of capacity.

Both of the AMD Zen 2 EPYC  7742 Rome processors offer 64 cores, 128 threads and operate at 3.4GHz. Nvidia's DGX A100 system can be configured with 1TB of DDR4 memory as a baseline, with upgrade options which can offer users up to 2TB of memory. 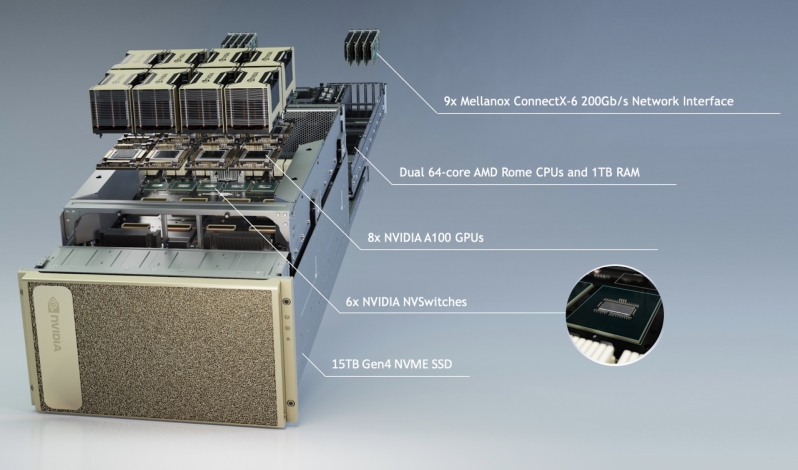 The simple fact of the matter is that Nvidia wants more bandwidth within its DGX systems, and AMD currently stands as the only x86 CPU provider which presently provides this number PCIe 4.0 lanes in its enterprise-grade processors. This consideration made AMD's EPYC Rome processors ideal for Nvidia's DGX systems, especially after considering their power efficiency.

You can join the discussion on Nvidia abandoning Intel in its DGX A100 system on the OC3D Forums.

AlienALX
haha another scalp for AMD

Dawelio
AMD is crushing Intel more and more, and I'm lovin' it!

looz
If I were to virtualise Windows 7 on this machine... Would it run Crysis?Quote

Warchild
Turning to its greatest rival over Intel. That shows how Intel are lagging behind.Quote

AngryGoldfish
it's funny that Nvidia are helping fuel their competitor's R&D budget, because that's what they continue to bolster quarter after quarter as their revenue improves with Zen (and maybe Navi, don't know if it's selling well).Quote
Reply