No, Nvidia's Titan V is Not equal to the RTX 2080 Ti when Ray Tracing Battlefield V

The Titan V supports Ray Tracing, but it's not as good a Turing

No, Nvidia's Titan V is Not equal to the RTX 2080 Ti when Ray Tracing Battlefield V

Nvidia announced their RTX technology at GDC 2018, long before the company revealed their Turing graphics architecture. During this time Nvidia had Volta on display, showcasing the graphical splendour that ray tracing could offer, leaving both developers and the public to assume that ray tracing would come first on Nvidia Volta series graphics cards.

Later that year, at Gamescom 2018, Nvidia revealed their RTX graphics card lineup, announcing that their new series of graphics cores would accelerate ray tracing workloads with a new hardware feature called RT cores, something which even the Titan V lacked.

Many of the developers who showcased Nvidia's RTX technologies at Gamescom had relatively little time with Nvidia's new GPUs before the event, leaving many to question how they created their RTX graphical demos so quickly. The answer is simple, they built them initially with the Titan V, the RTX golden child of GDC, adding support for the Turing-based RTX series later.

When the news came to light that Nvidia's Titan V supported RTX ray tracing in Battlefield V, my first reaction what that this wasn't surprising. It makes sense for the Titan V to support the feature, as that's what Battlefield V's RTX effect was initially created with. Unfortunately, reports of the Titan V's ray tracing support also came with a lot of misinformation attached, alleging that the Titan V offered the same performance as an RTX 2080 Ti.

At the time we could do little to remedy these falsehoods, as we lack an Nvidia Titan V to compare to our RTX 2080 Ti. You can't blame us for not spending $3,000 for a graphics card that would only be tested once.

Thankfully there are like-minded individuals on the internet who wanted to address this controversy, with PC-Better leading the charge. Using his Titan V, RTX 2080 Ti and Titan RTX graphics card, he compared their relative performance in Battlefield V, finding results that were far from what the rumours claimed. 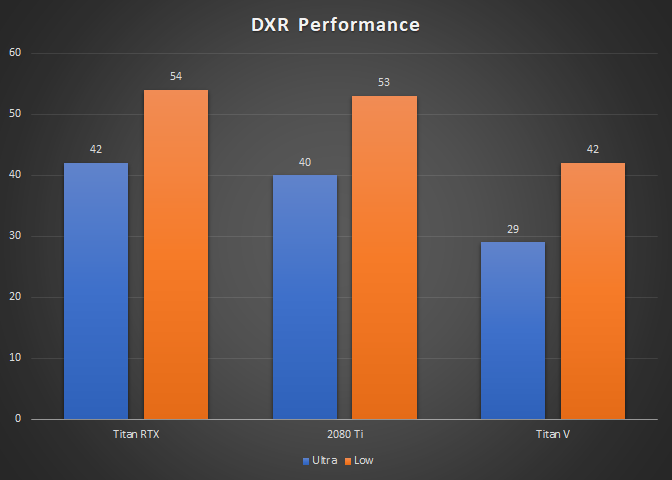 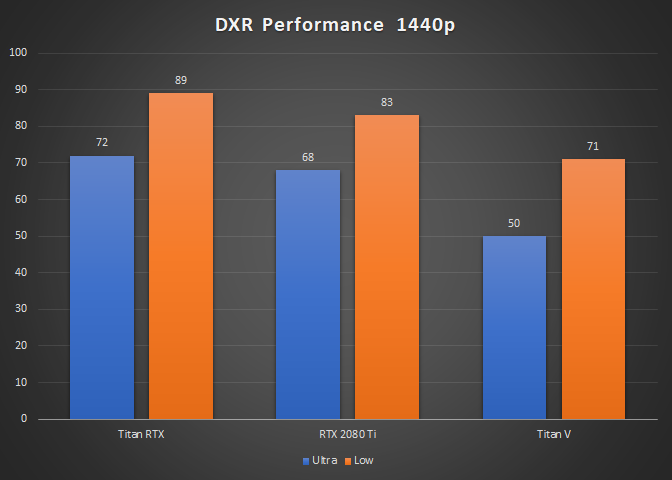 Looking at the results above we can see that the Titan V not only offer less performance in Battlefield V than an RTX 2080 Ti but that the RTX 2080 Ti can set ray tracing to low and offer a framerate disadvantage of two FPS when compared to the Titan V with RTX disabled. This is a far cry from the performance parity that was rumoured.

Analysing the results further, we can also see that the Titan V lost over 30% of its performance (at 1440p) when setting DXR to low, while the RTX 2080 Ti lost around 19% of its performance at the same resolution when enabling DXR, again showcasing that Nvidia's RTX series is a lot more capable of handling ray tracing workloads. We'd also be willing to bet that this performance gap would get wider is Battlefield V's RTX settings were increased further.

What PC-Better's analysis shows is that you shouldn't believe everything you read, especially when the rumours in question were sourced from a single forum post.

You can join the discussion on the Titan V's RTX performance on the OC3D Forums.

tgrech
Also worth noting the Titan V is NVidia's most powerful (And expensive single card) GPU to date in terms of raw compute performance with hundreds more CUDA cores than any other model including the RTX Titan(While having very similar shaders & traditional per shader unit performance), presumably those numbers are near 2080 performance, a card with almost half the CUDA cores.Quote

WYP
Quote:
The Concurrent FP and INT pipelines in Turing work wonders in a lot of newer games. Battlefield V and 1 are good examples in this regard.

I can see a Keplar to Maxwell style jump where the performance gap between Turing and Pascal will get wider over time.Quote