Will Navi be shown at E3 and/or Computex?

AMD has already confirmed that gamers "will hear more about Navi in 2019", making it probable that the company will launch Navi-based 7nm graphics cards before the year is over.

While the Radeon VII is an impressive graphics card (early gaming benchmarks here), it retains the company's ageing Vega architecture, leaving it behind Nvidia in certain technological fronts, lacking ray tracing features. Now, it looks like we will be hearing more about AMD's next-generation offerings soon, especially if the latest rumours are to be believed.

Red Gaming Tech has reported that AMD's Navi architecture will launch in June, with graphics cards releasing around a month later, placing the architecture's launch within the timeframe of both Computex and E3 2019. Insider sources also claim that the company is positive about their upcoming launch, which is a good sign for the architecture.

A Navi announcement in June could place Phil Spencer's presence at AMD's CES 2019 keynote into further context, as Microsoft is expected to release more details about their next-generation Xbox at E3 2019, a console that is likely to make good use out of AMD's Navi graphics architecture. Long-term rumours have also suggested that Sony was a major contributor to Navi's development, making it likely that aspects of the architecture have been tuned with the PlayStation 5 in mind.

The report from Red Gaming Tech revealed no specific performance numbers, saying little more than that the architecture will be targetting the "low to mid-range", but these days that will span from graphics hardware such as the Radeon RX 560 to graphics cards like the RX Vega 64 and Nvidia's new RTX 2060/70 graphics cards. At this point, it is hard to guess what the potential of AMD's Radeon Navi architecture will be.

Higher-end Navi graphics cards are expected to arrive later in 2019, or early 2020. 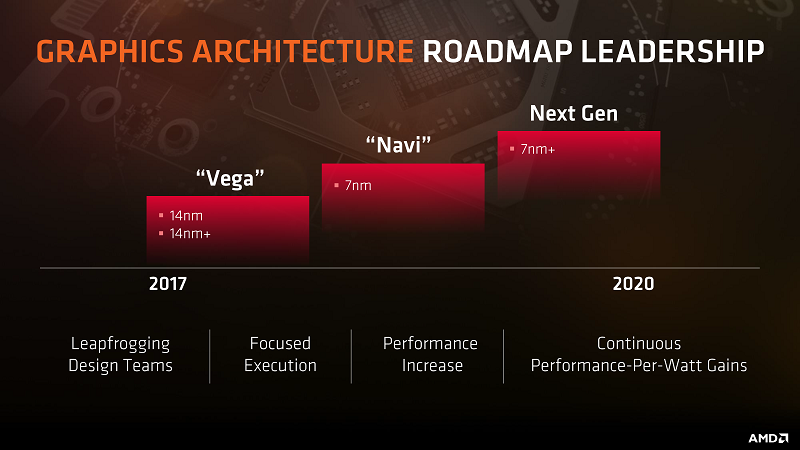 One of AMD's aims with Navi is to offer enhanced "scalability", with the work appearing in AMD's earliest roadmaps for the architecture. While some believe that this means that AMD is taking a multi-chip approach, another way to look at it is the ability to better scale their graphics architecture from low-end devices to high-end products.

AMD's GCN-based architectures have been limited to a maximum of 4096 stream processors since the release of the RX Fury X in 2015, limiting Radeon's scalability to higher performance targets. Overcoming the limits of GCN could be what Navi is designed to accomplish, though we will have to wait until later in the year to know exacly what Navi is capable of.

You can join the discussion on AMD rumoured June 2019 launch for Navi on the OC3D Forums.

Dicehunter
I may hold off on the Vega 7 purchase and see if Navi is a proper successor to Vega.Quote

tgrech
If it's coming this soon I don't think it'll be touching Radeon 7's space for now, the only architecture they have that's notably out of date at the moment is Polaris (It's technically been 3 years since AMD had a new low-mid end architecture), the easy guess would be a ~40CU and a ~20CU die again, with very loosely about 70% and 35% the performance of Radeon7 respectively, presumably closer to 50% and 25% of the price (RX680/660 with a cut down version of each below). Presumably the higher end models/VegaII replacements are closer to 12 months away.

Edit: To be honest I wouldn't be surprised if they skipped straight to 700 to keep up their shoving 7's in absolutely everywhere.Quote

Giggyolly
I've had the Fury X and V64 LC, but given the price of Radeon 7, I think I'm going to wait for high-end Navi.
A 2 year upgrade cycle may be a bit more sensible for me hahaQuote

AngryGoldfish
Quote:
Yeah, I don't think there's any point waiting for high-end Navi if you're the type who loves to upgrade or if you need more performance and you're on something like a 290X or a GTX 980. I would only consider waiting for an unconfirmed card if I was currently totally satisfied with what I had and would only upgrade if something extra special came along. Radeon VII is definitely not special to me so I'm not bothering with that.Quote
Reply