AMD has already confirmed that 3rd Generation Threadripper CPUs are coming, starting with a new 24-core model this November. Even so, AMD hasn't officially revealed any new TR4 motherboards at this time, which is odd given Threadripper 3rd Gen's expected support for PCIe 4.0.

Don't worry, at least MSI has got you covered. Yes, MSI has accidentally revealed their first next-generation Threadripper motherboard, the Creator TRX40, which is listed on MSI's "Shout out for MSI" promotional webpage (via Videocardz).

If recent rumours are correct, TRX40 will offer Threadripper users support for quad-channel memory, support for PCIe 4.0 and support for AMD's Ryzen Threadripper 3000 series processors out of the box. Rumour has it that there will also be a new workstation platform from AMD that's based on Threadripper, though this has not been confirmed.

MSI's "shout out" promotion allows those who purchase and review MSI products to receive up to $25 in Steam Wallet codes, allowing them to save money on their next video game purchase.

AMD fans should expect to hear more about AMD's next-generation Threadripper processors in the coming weeks. 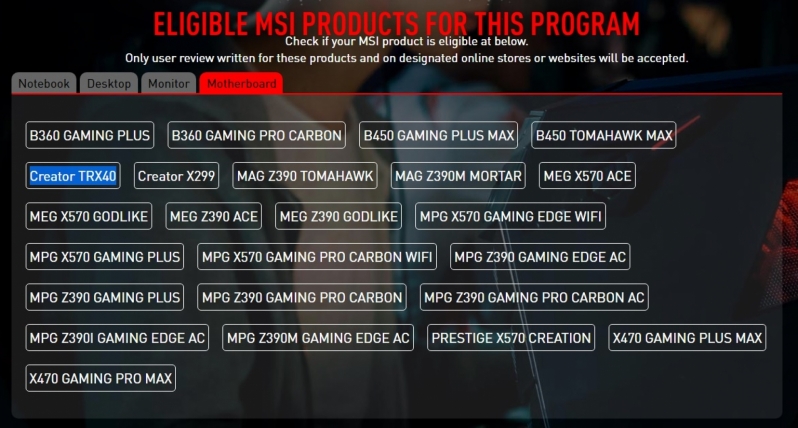 You can join the discussion on MSI's TRX40 Creator motherboard on the OC3D Forums.

NeverBackDown
I read that as T Rex 40