I heard you like screens, so MSI put some screens on your screen so you can screen while you screen!

MSI has a lot of exciting display option at CES 2020, and one of the most innovative, and unexpected, is their MEG381QCR. Even when it comes to its basic specs, things are unusual with the MEG381QCR. The monitor offers an uncommon screen resolution and size of 3840x1600 and 38 inches respectively. What's stranger is what MSI placed underneath.

The unique selling point of the MEG381QCR is MSI's addition of an OLED screen to the bottom left corner of the display, an add-on which allows users to see extra information and connected systems. Beside this secondary screen is what MSI calls a "Human-Machine Interface", a dial which allows users to select options, and control the screen and a connected system. For example, MSI's connected Aegis Ti5 system would have it's RGB LEDs controlled using this dial, and users can use the screen to see system temperatures and other data points. Users can also overclock their Aegis Ti5 system using this screen.

MSI's MEG381QCR also features a front-facing camera which can be used to see if the user is suffering from eye fatigue. If it senses eye fatigue, the screen will reduce its brightness, informing its users that they may need a break.

The screen used in MSI's MEG381QCR is a VESA DisplayHDR 600 compliant IPS monitor with a 2300R curvature, featuring what MSI advertises as a 1ms response time and support for refresh rates up to 144Hz.

Like other high-end MSI screens, the MEG381QCR supports Steelseries' GameSense technology, which allows the LEDs on the bottom of the screen to change in response to in-game situations. This can give gamers a competitive advantage in some supported titles. 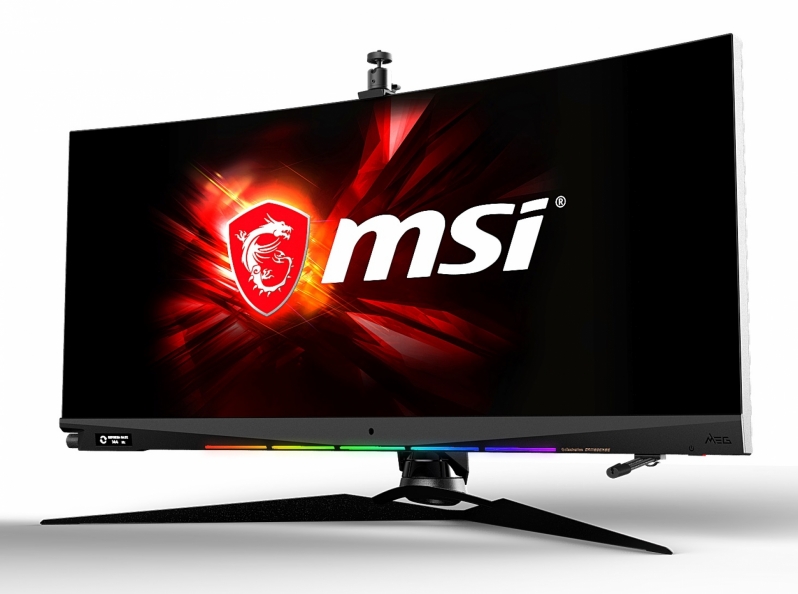 At this time MSI has not confirmed the pricing or release date of its MEG381QCR gaming screen, though we are excited to see this screen in action again. I wonder if this screen's LCD can support data prompts from MSI afterburner?

You can join the discussion on MSI's MEG381QCR gaming display and its second screen on the OC3D Forums.

Peace Đ
To be honest, while it may seem weird at first glance, I find it way more appropriate than screens on keyboards, because THAT screen can actually be comfortably looked at while playing games, unlike a screen on a keyboard.Quote
Reply