The Russian modder VIK-On has created the world's first working 16GB RTX 3070, creating a walkthrough showcasing how he replaced the 8Gb (1GB) GDDR6 modules on his RTX 3070 with larger 16Gb (2GB) modules.

VIK-On has released two videos that detail his 16GB RTX 3070 project, the first of which covers the upgrade and the second of which covers how he managed to ensure the stability of his customised graphics card.

This modding project gives Nvidia's RTX 3070 as much video memory as AMD's RX 6800, RX 6800 XT and RX 6900 XT, delivering gamers specifications that are similar to what consumers expect from a future RTX 3070 Ti or RTX 3070 Super graphics card. 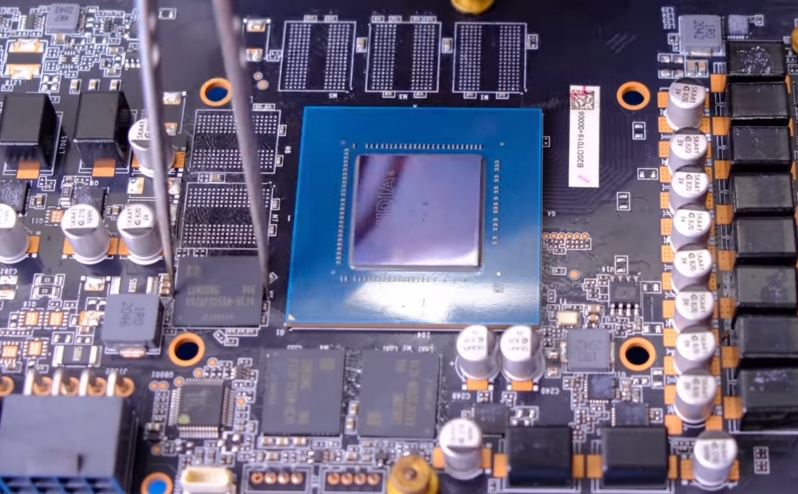 Nvidia's GPU BIOS' are difficult to modify, making it impossible to make VIK-On's RTX 3070 16GB fully functional through BIOS modding. To get his 16GB RTX 3070 to work, VIK-On had to trick his graphics card into utilising its 16GB frame buffer, utilising specialised strap settings though trial and error. This was a lengthy process, but it did yield a functional 16GB RTX 3070.

Sadly, even with these tricks, VIK-On's 16GB RTX 3070 exhibited stability issues. The graphics card would randomly black screen during many applications, though the graphics card could run 3DMARK if it used Furmark simultaneously.

With this fix in place, the custom 16GB RTX 3070 could run 3DMARK without crashing and could even be used for mining applications. The graphics card performed similarly to other RTX 3070 graphics cards, which makes sense as only the GPU's VRAM capacity has changed.

Nothing stops Nvidia from creating a 16GB RTX 3070; VIK-On's mod has proven this. With the right BIOS modifications, Nvidia could get this working without any stability fixes or mods. However, it is worth remembering that using 16GB of VRAM will make the RTX 3070 more expensive to produce.

As the hardware specs of next-generation consoles influence PC gaming, VRAM requirements should increase significantly for future games, creating the need for graphics cards with larger allocations of video memory. This is especially true for the game that will offer graphics settings on PC that are more taxing than their console counterparts. AMD has already prepared for this situation with their RX 6000 series, and Nvidia may follow suit with new RTX 30 series GPU models.

You can join the discussion on VIK-On's 16GB RTX 3070 graphics cards on the OC3D Forums.

dazbobaby
So the only 3070 on the planet in the hands of a gamer... gets modded?Quote
Reply