All of these benchmarks have been manually set to a resolution of 4K, making benchmarks like 3DMARK Port Royal a lot more demanding than it typically would be.

As noted before, newer AMD drivers reportedly give AMD's RX 6800 XT a notable performance boost. Even so, Ampere appears to have a substantial performance advantage in UL Benchmark's ray tracing test.

If these benchmark results are legitimate, AMD's RX 6000 series will offer gamers a performance advantage in rasterised workloads over their Nvidia rivals. That said, Nvidia's reported ray tracing edge would become more of a factor as ray tracing becomes more common within future PC releases. It is also worth noting that Nvidia's DLSS technology won't be supported on Radeon hardware, giving Nvidia another advantage. 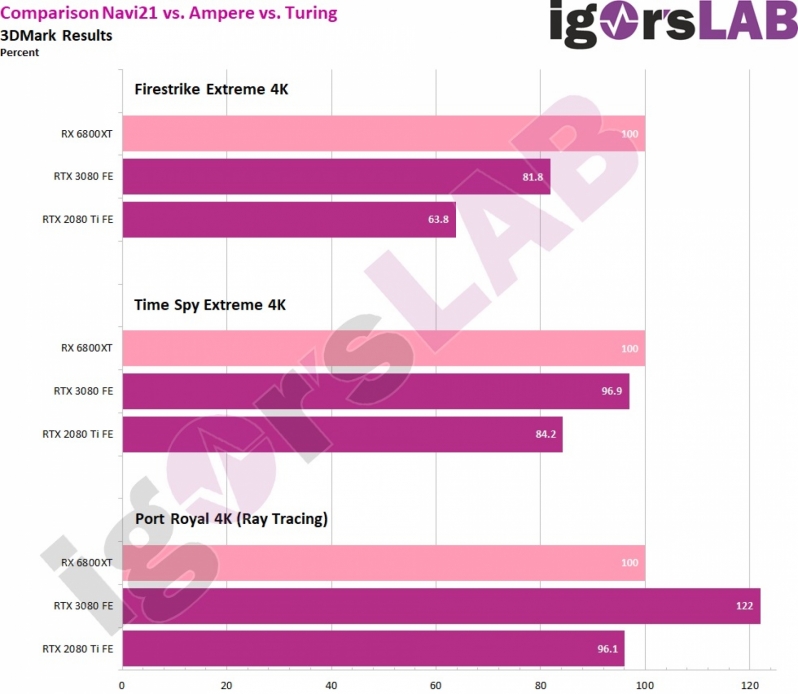 Regardless of what way you look at these benchmarks, AMD's RX 6800 XT appears to be a strong competitor to Nvidia's RTX 3080 graphics card, which is excellent news for the PC gaming market and excellent news for AMD. Even so, Nvidia's technological advantage with DLSS will allow the company to maintain a strong footing, even if AMD can deliver stronger performance levels in traditional workloads.

You can join the discussion on AMD's leaked RX 6800 XT benchmarks showcasing strong 4K performance on the OC3D Forums.

Bagpuss
Ray Tracing performance on Par with the Turing cards, 2080Ti at that.


Have to say that's much better than I was expecting, if confirmed of course, and a very impressive first stab at their hybrid hardware/software based approach to Ray tracing.


Well done AMD...and I say that as a confirmed Nvidia user.


I suspect many people will be relieved that when it comes to RT, these cards will offer an excellent alternative to the Ampere cards for Cyberpunk 2077, even if RT on Radeon cards won't be supported until CD Projekt patch in support for the new AMD cards.Quote

5pm next wednesday will be an intresting watch

Daiyus
I've got a feeling that the 6800 XT just might be my next graphics card. I'm really excited to see these get into the hands of reviewers.Quote

AngryGoldfish
That's higher than I would have imagined. I imagined the 6800XT would be below a 3080 slightly with the 6900XT being somewhere between a 3080 and a 3090. Solid RT performance as well given the circumstances.Quote

AlienALX
So it was the 6800XT AMD showed then. Meaning they still have the 6900XT and possibly XTX to come.