This means that GDDR5X will be very easy to transition to from GDDR5, meaning that it should be adopted very quickly by both AMD and Nvidia for upcoming GPUs, offering an increase in memory bandwidth without increasing overall GPU complexity.

"GDDR5X represents a significant leap forward for high end GPU design," said Mian Quddus, JEDEC Board of Directors Chairman. "Its performance improvements over the prior standard will help enable the next generation of graphics and other high-performance applications." 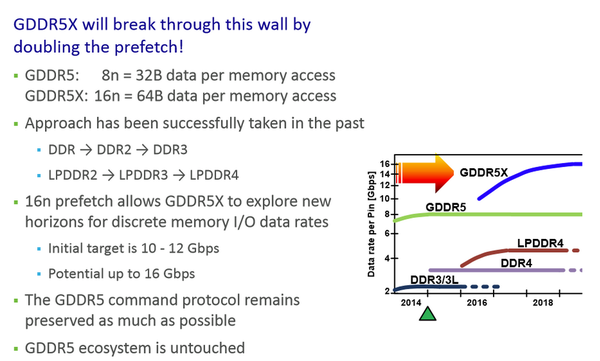 So far in the first generation of this memory Micron has increased the memory data rates of GDDR5 from 8Gbps to between 10-12Gbps with GDDR5X, with future iterations hoping to surpass 14Gbps mark or even reach its theoretical maximum of 16Gbps.

dwatterworth
Still no word on power consumption changes if any?Quote

WYP
Quote:
no word yet, but it is expected to be higher than GDDR5. It is architectural changes that give the extra speed, so it is not going to be 2x GDDR5.Quote

NeverBackDown
HBM isn't in low supply anymore.. hasn't been for couple months. HBM2 isn't out yet so can't say it will be either

I suspect all next gen card to use HBM2 in the high end, GDDR5x in the mid-high end and regular ol' GDDR5 in the low end. Would make sense price wise for these anywayQuote
Reply