At the time of writing relatively little is known about Intel's Xe graphics architecture, aside from the company's plans for it to scale from consumer/gaming offerings to the high-end datacenter market.

Today, Intel has confirmed that their Xe architecture will support "ray tracing hardware acceleration", with the company hoping to combine the powers of their CPU and graphics hardware to push the world of raytraced graphics forward, though today's announcement focuses on the datacentre and on filmic rendering.

Rather than talk about gaming, Intel has instead talked about rendering How To Train Your Dragon: The Hidden World", which was rendered on Intel processors. Support for DXR, Microsoft's DirectX 12 Ray Tracing Extention, is not mentioned in Intel's announcement, with the company instead discussing their "Intel Rendering Framework family of API's and Libraries".

Intel's Jim Jeffers confirmed that the company would support ray tracing hardware acceleration with this comment; 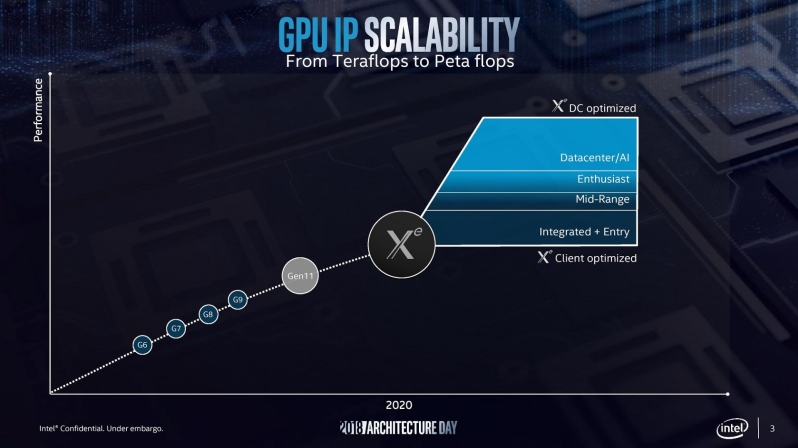 While this announcement doesn't confirm DXR support for Intel's consumer-grade or gaming graphics cards, it showcases that ray tracing has been on Intel's mind for quite some time. With Nvidia pushing into the filmic rendering scene with their Quadro RTX series graphics cards, Intel knows that they need to work harder to maintain their position in the rendering market. Relying on CPUs alone will eventually not be an option, so graphics hardware with dedicated ray tracing features is a must.

You can join the discussion on Intel's Xe graphics architecture supporting ray tracing hardware acceleration on the OC3D Forums.

You know, I was actually sitting here thinking that we don't have enough yet, so need one more just to put developers off even more /rolls eyes.

This is a joke. Once again something cool is being bummed out hard to make cash, instead of any passion whatsoever. And, it will die like everything else too. I can just see it now... One year from now they will be trying to sell us something else whilst we look at all of the dead tech we own.

I'm so glad I went out and bought a PS4 today to go with my XB1X. I feel liberated, and instead of sitting around waiting for stuff I am going to enjoy it now, in the present.Quote

Warchild
Quote:
I am actually done with the PC. I will only use it for games I know excel on the PC or are only available there, (which becomes even more rare than ever before).

I haven't made a purchase for the pc in over a year. I still value fps over graphical quality, so over time, I'll simply start reducing the details in order to keep my 80fps+.
I haven't even turned on my Xbox1 in months.

But regardless of all that random babble. Intel focussing on RT as well means we have 3 GPU competitors aiming in the same areas, which could entice developers to push more for raytracing. It is still far from being mature so it is bound to have a rough start.

If Graphic quality hits a wall or requires horsepower beyond what is available, then ray tracing could still push the immersion to making enjoyable quality detail. Either that, or it could fail hard like 3D Vision. remember though, if we didnt have a focus on 3Dvision from Nvidia, and whatever AMD had, we would never have pushed monitor refresh rates as far as we did back then. We had 120hz next gen screens with the intention of using them for 3D. New tech can be useless tech, but it most certainly pushes innovation in other areas we take for granted.Quote

tgrech
This will be DXR, MS confirmed they were working with all three vendors back in early 2018. All three vendors use the same API, one of them gives it a different name.

No hardware vendor would have taken the risk of committing so much resources to this if they weren't sure it was going to have wide software support eventually. Nvidia just tried to cash in on the whole timed exclusivity thing with their own branding material and an early consumer launch.

Don't act too surprised when this comes to next gen consoles. I'd bet money on it personally.Quote

AlienALX
Quote:
Yup mine is going to grow old gracefully now. I thought I was done before, now I know I am. I've even got two full complete systems.

There's no fun in it any more. Every good idea is used as a marketing gimmick and utterly destroyed as a result

I'm not even being cynical either. I was so happy walking and home from Game with my PS4.Quote

Warchild
Quote:
Yep, except their marketing ploy has failed miserably. I think the "only" reason they opened up RTX to the Pascal series GPU is to try and entice the weak minded, or weak willed people into seeing it operate at a low fps, and foolishly falling for the "i need to upgrade to see this with high fps".

We all slammed VR as a marketing ploy though. We all said it would fade and disappear, but it hasn't gone anywhere. In fact it is gaining traction. Just slower than expected. I was on that side of the fence too saying it would die. After getting the rift for Xmas, I swing my vote completely. It is enjoyable, its tech is maturing nicely. I just want to see more AAA titles designed for VR and not modded over to support it (Skyrim/Fallout)Quote
Reply