Intel's 3D Xpoint SSDs have been spotted at validation bodies, meaning that production models of these new ultra-fast SSDs are already in the wild and that they have been confirmed to function using the NVMe standard.

This SSD has been validated by the University of New Hampshire's InterOperability lab (UNH-IOL), confirming that these SSDs are NVMe compliant and will function with NVMe compatible hardware.

SSDs based on 3D Xpoint would simply be too fast for traditional SATA or SAS SSD connections, easily saturating the connection and limiting the drives potential performance. It is currently believed that Intel helped to establish the NVMe interface because they were secretly working on this new memory type.

Last month a new roadmap for Intel's Ultra fast SSD storage technology was leaked on Benchlife.info, revealing that we may be seeing XPoint memory in consumer products by the end of 2016.

Intel's 3D XPoint memory technology is a major breakthrough in memory process technology and the first new memory category since the introduction of NAND flash in 1989, bringing to the market a Non-Volatile memory which sits almost exactly in between existing NAND and DRAM technologies with the benefits of both.

Intel has already announced that this new memory technology will be making its way into consumer SSDs in 2016 and will offer up to 5.5x the speed of Intel's NAND based DC P3700 NVMe SSDS under most workloads and up to 7x faster when under a que depth of 1, which has traditionally been where traditional SSDs are at their weakest. 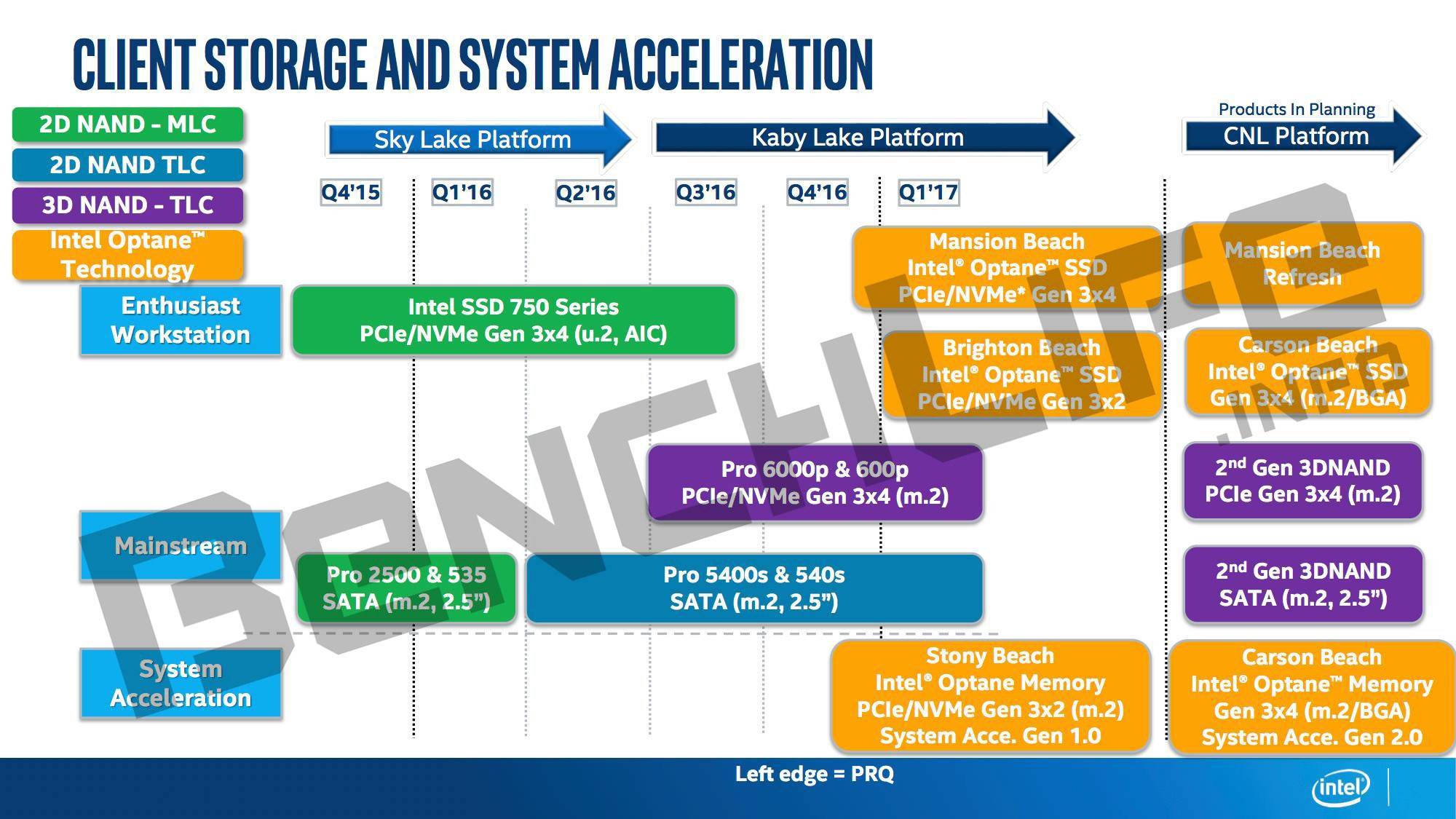 As well as using their new XPoint memory in traditional SSD storage devices it seems that Intel is planning on offering what they call "System Acceleration", which is currently thought to be a high speed caching solution for traditional SSD or HDD storage medium.

In theory, a system accelerator will cache frequently used files and provide your system with storage speeds that can exceed that of traditional SSDs and offer almost RAMDISK like performance for cached files.

It is clear that Intel's new XPoint memory will change the way that a lot of systems builders think about storage, combining a fast cache with a more budget/capacity oriented SSD instead of a top of the line performance oriented SSD. Hopefully, we will learn more about this new technology soon.

You can join the discussion on Intel's XPoint Storage technology on the OC3D Forums.

tuklap
I hope the price is not predatory in nature

Kushiro
Dont expect it to be cheap, thats for sure.Quote

Dicehunter
If it's speeds 5.5 times faster than their current NVME drives then that's 11,825MB/s and write speeds of 8,525MB/s