At CES 2020, Intel showcased the potential of their Xe graphics architecture within its Tiger Lake series processors and their DG1 (Discrete Graphics 1) GPU.

Intel's Xe architecture acts as a major redesign of the company's graphics IP, with Intel claiming that Tiger Lake will offer a 2x boost on graphics performance over Ice Lake and offer discrete level GPU performance with DG1.

Tiger Lake processors will combine the powers of Intel's Xe graphics, their next-generation Willow Cove CPU cores and features like integrated WiFi 6 and Thunderbolt 4. These processors will be created using a new 10nm+ manufacturing process, with Tiger Lake being due to release into the mobile market sometime this year.

Intel's DG1 discrete graphics card was showcased running Warframe, and Destiny 2 on a Tiger Lake powered laptop. Neither of these games is overly demanding on PC, giving us no clear indication of how powerful DG1 can be. Even so, mobile-ready discrete graphics is a major step for Intel by itself, though it remains to be seen if the architecture can compete with discrete graphics components from AMD and Nvidia in terms of power efficiency, pricing and performance. 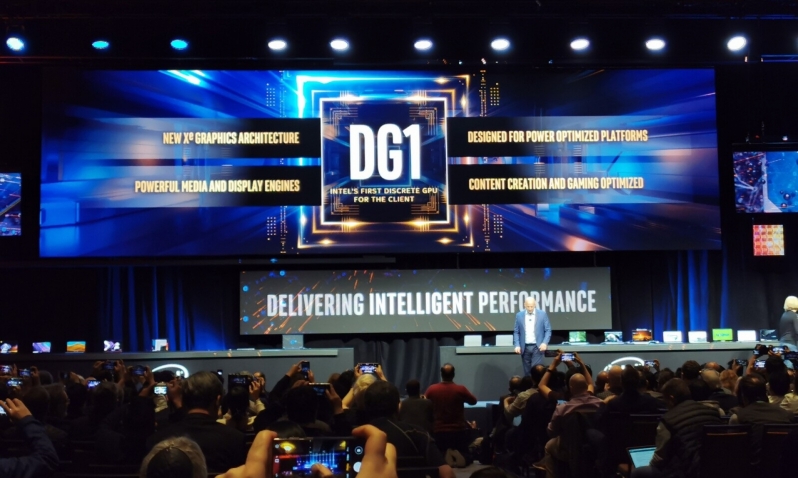 While Intel's Xe graphics are unlikely to set the world on fire with its Warframe-ready performance levels, it remains a major step in the right direction for Intel graphics division. In a few years, Intel will hopefully turn the gaming graphics market into a three-horse-race, which will undoubtedly be good news for gamers. Extra competition will reduce prices, and a new competitor is a surefire way to bring more competition to the worlds of both integrated and discrete graphics.

You can join the discussion on Intel's Xe graphics architecture and DG1 discrete graphics chip on the OC3D Forums.