Now, Intel has made it clear that they have ambitions within the graphics market and plans to release dedicated graphics cards in 2020, making now the perfect time to implement VESA-Adaptive Sync support into their graphics card lineup, ready for its eventual launch.

In a conversation with Intel's Chris Hook, a former employee of AMD's Radeon Technologies Group, Hardware Subreddit Moderator dylan522p managed to reconfirm Intel's commitment to Adaptive-Sync, a technology which would allow them to take advantage of the wide range of FreeSync/VESA Adaptive Sync displays on the market. 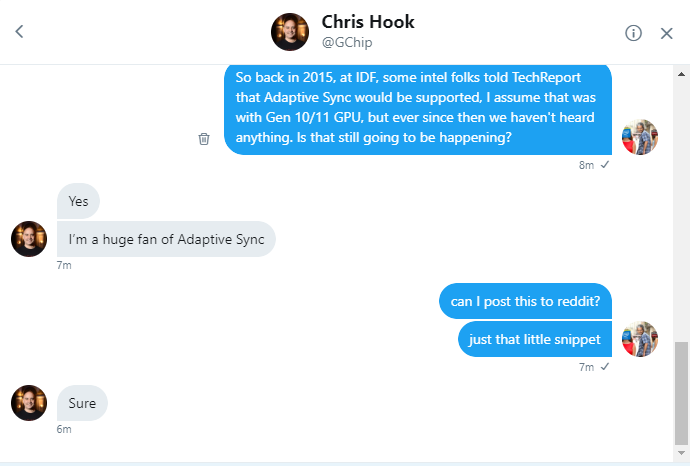 Supporting the Adaptive Sync standard is a logical move for Intel, as the company doesn't have enough clout in the graphics market to develop their own, independent, adaptive refresh rate technology. Proprietary I-Sync monitors wouldn't sell very well, especially when paired with unproven graphics hardware, but support for VESA Adaptive Sync could help convince consumers to purchase Intel graphics cards over their rivals.

At this time it remains unclear whether or not Intel plans to support competing variable refresh rate (VRR) standards like those included in HDMI 2.1, a standard that AMD already plans to support on their Radeon graphics products (link).

You can join the discussion on Intel's plans to support VESA Adaptive-sync on the OC3D Forums.

WYP
Quote:
Well, you also need to remember that Intel hasn't made a new graphics chip in 20 years.

Yeah, Kaby Lake added 4K video decode, but aside from that it is Intel's usual "Keep calm and re-release Skylake".Quote

NeverBackDown
Quote:
Does the opposite. Stops innovation and let's a handful only do the innovating and everyone has to wait. You need both.