'take an in-depth look at the new and innovative features'

Intel has been working hard on getting into the GPU game for the past number of years, preparing to deliver a 2x increase in per clock performance with their upcoming 11th generation of integrated graphics processors.

This new series of iGPUs will be released in 2019, and Intel hopes that game developers will start designing their products with Intel graphics in mind. At GDC 2019, Intel's Michael Apodaca will lead a session where he will take an in-depth look at the company's new graphics architecture, explaining the "innovative features" and the new "building blocks" of their 11th generation technology. At GDC we will learn how these changes will impact Intel's gaming performance, giving us a glance of what is coming from Chipzilla's GPU division.

Intel's Gen11 graphics solutions will be built using the company's 10nm manufacturing process and will ship inside Intel's 10nm processors in 2019, delivering a 2x improvement in performance per clock over their current Gen9 offerings. Intel's Gen10 will be skipped, likely due to the long-term delays of 10nm and Intel's Cannon Lake processors. If Gen11 is ready, why would Intel even consider shipping Gen10?

Not only will performance per clock improved, but Intel's Gen11 graphics processors will also feature up to 64 execution units, which represents a huge increase over the 24 units offered with today's Gen9 (Skylake) and Gen9.5 (Kaby Lake/Coffee Lake) processors. Gen 11 graphics cards will provide over 1 TFLOP of GPU compute performance, which is a first for an Intel mobile GPU. For context, the AMD-powered Xbox One console offers 1.4TFLOPs of GPU compute performance, though at this time it is unknown how well Intel iGPUs will compare to AMD's offerings in gaming workloads. 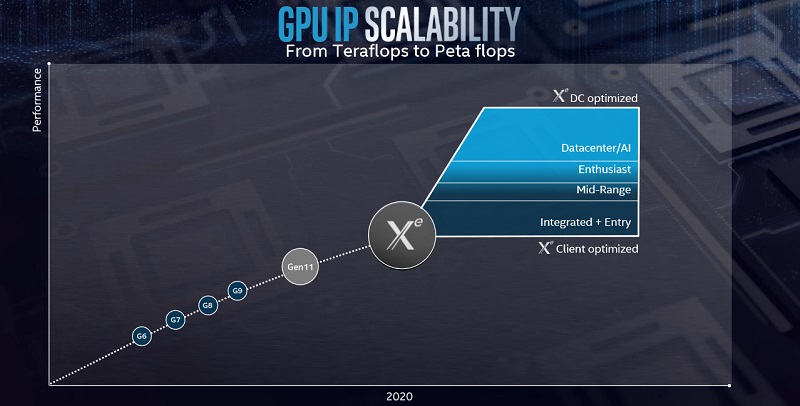 Moving onto 2020 Intel plans to release dedicated graphics products that are based on their newer Xe graphics architecture, though at this time Intel has not revealed any performance data on these upcoming processors. All we know is that Intel plans to support use cases that span from Teraflops to Petaflops, targetting entry-level consumers systems, PC enthusiasts and datacenter users.

You can join the discussion on Intel's plans to discuss their 11th Generation GPU architecture at GDC on the OC3D Forums.

NeverBackDown
I'm honestly really interested in this for mobile. It'll be a great alternative to a Nvidia GPU. Won't match performance but more than enough likely for light gaming like Civ I'd wagerQuote

This place is turning into copy paste of other news sites.. wheres all the original content and exclusives gone ?Quote

NeverBackDown
You don't get around much then. Apparently you didn't even read his article on Metro.Quote
Reply