Intel's integrated graphics have been considered a joke to high-end PC gamers for quite some time, though it must be noted that Intel has made a lot of strides over the years, especially with the likes of Broadwell and Skylake, though the company remains behind AMD/Radeon in the world of iGPUs.

In the company's 2019 investors meeting, Intel made one thing clear, they are focusing on graphics, and they want to be the "leader in integrated graphics", a title which will secure for them the high-end notebook market, at least for machines that don't require the power of discrete graphics solutions.

Ice Lake, which will become available in notebooks later this year, Intel is moving to their Gen 11 graphics architecture, promising a significant leap in performance over today's Gen 9.5 offerings, which themselves are enhanced versions of the Generation 9 graphics that Intel has used since the launch of Skylake.

With their latest Whiskey Lake mobile CPUs, Intel currently offers users a total of 24 execution units in a 3x8 (three groups of eight) configuration. With Ice Lake this shifts to an 8x8 setup, giving Intel a 2.67X increase in execution units and a promise of a 2X boost in graphics performance. This suggests that clock speeds will decrease a little with Ice Lake, likely to keep Intel's mobile SoC under its intended 15W power envelope.

Moving beyond Ice Lake, we have Tiger Lake, which will be the first architecture which will utilise Intel's Xe graphics engine, promising to deliver a project 4x boost to performance over the Whisky Lake, albeit with Tiger Lake using 25W of power when compared to Whiskey Lake's 15W. Intel's slides also indicate that Tiger Lake will have 96 Execution Units, which is a 3x boost over Whiskey Lake.

Tiger Lake is projected to have a 2020 release, and it is clear that Intel intends to offer exponential levels of graphics performance growth in the coming years, a change that will work to overcome the competitive advantages that AMD/Radeon provide in the mobile market. AMD's Ryzen 3000 series mobile APUs are not due to be replaced until 2020, giving Intel an opportunity to surpass their rival in terms of integrated graphics performance. 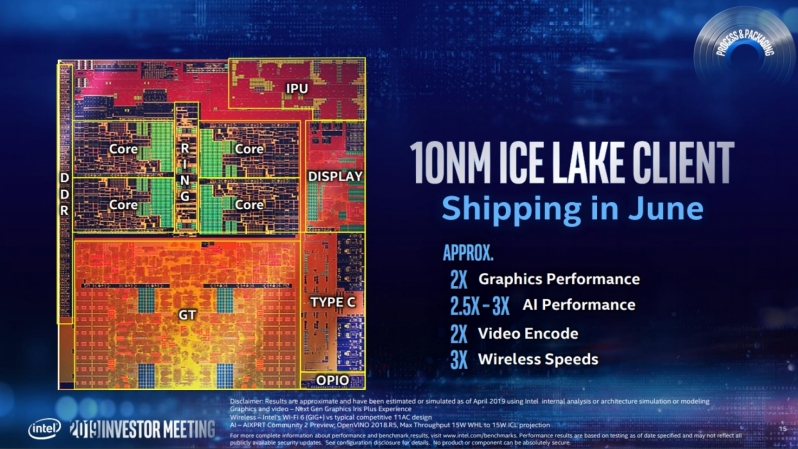 Intel plans to become to compete with both AMD and Nvidia in the graphics market, with the integrated graphics market being the first place to be shaken by the company's GPU ambitions. This change will make the mobile CPU market more competitive than ever, especially as AMD starts to introduce 7nm mobile products.

Promising a 4x boost in integrated graphics performance is nothing short of revolutionary for Intel, who until now have focused squarely on superior x86 throughput. One thing's for sure, things are about to get a lot more interesting in the mobile CPU market.

You can join the discussion on Intel's plans to become the leader of the integrated graphics market on the OC3D Forums.

Gothmoth
Can't win in one market shift your focus to another. 😉


I do not care about mobile but i am eager to see what a happens when AMD releases the R3000.


How intel will counter that.Quote
Reply