Intel benchmarks its ARC A750 graphics card against Nvidia's RTX 3060

Note that all tested games are DirectX 12 titles

Earlier this week, Intel published a new benchmarking video for its ARC Alchemist A750 graphics card, showcasing gameplay for Control and benchmarking data that compares Intel's ARC A750 and Nvidia's RTX 3060 head-to-head.

What's strange about this video is the fact that it replaced an older video from Intel, a video that showcased the same benchmarking data and gameplay from Cyberpunk 2077. Intel has set this old ARC A750 video to private on YouTube, and at this time we do not know why.

With their ARC A750, Intel claims that they can deliver performance levels that are higher than other GPUs in its product segment, which should mean that Intel is planning to offer gamers more performance per pound (or Dollar) than their competitors. Even so, Intel's Ryan Shrout has noted that "the performance of ARC won't look like this in all games". It is likely that AMD and/or Nvidia can beat Intel in specific games or workloads.

Below is the data that Intel has showcased to compare the performance of their ARC A750 and Nvidia's RTX 3060 in Cyberpunk 2077, Control, F1 2021, Borderlands 3, and Fortnite. In all these games Intel's ARC A750 can best Nvidia's RTX 3060. Below, performance advantages of 6-17% are shown, which is an impressive result from Intel. That said, all of these games are DirectX 12 titles, and early reports have suggested Intel's ARC A-series deliver poorer performance levels when using older graphical APIs.

The main benchmark in Intel's new video showcases control running at framerates above 60 FPS at 1440p. According to Intel's data, their A750 graphics card can deliver gamers a 14% performance improvement over an RTX 3060. 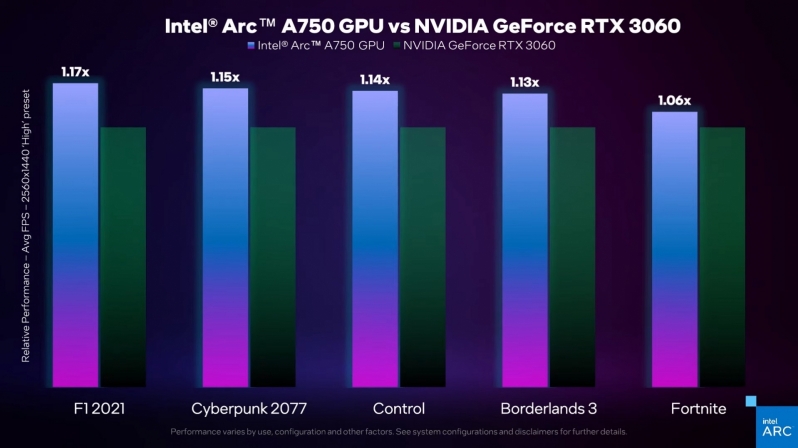 You can join the discussion on Intel's ARC A750 benchmarking video on the OC3D Forums.

Dicehunter
Now they need to come in under a 3060's price to entice new customers.Quote
Reply