HTC's Vive Cosmos has the company's highest-resolution screens to date

Here are the specs of the Vive Cosmos.

HTC's Vive Cosmos has the company's highest-resolution screens to date

HTC has revealed a lot of information about their upcoming Vive Cosmos VR headset, laying down some of the headset's key specifications to enable some specification comparison with today's other VR offerings.

Before now, HTC has only stated that the Cosmos will deliver the company's "sharpest screens yet", a "minimal screen door effect" and "crystal clear graphics". Now, we know the resolution that the Vive Cosmos will offer, its refresh rate and other display characteristics of the headset.

For starters, the Vive Cosmos will utilise "real RGB panels" and offer a combined resolution of 2880x1700, which represents an 88% increase in resolution over the original 2160x1200 Vive. HTC also boasts a 40% improvement in lens clarity over the original Vive, and that their new headset will offer a refresh rate of 90Hz.

The Vive Cosmos has also moved to use an inside-out tracking system, which will use six cameras to judge headset and controller positioning. This change is necessary if HTC wants to lower the Vive Cosmos' pricing, as while Valve's SteamVR Lighthouse system is incredibly accurate, it's too expensive for the majority of consumers. 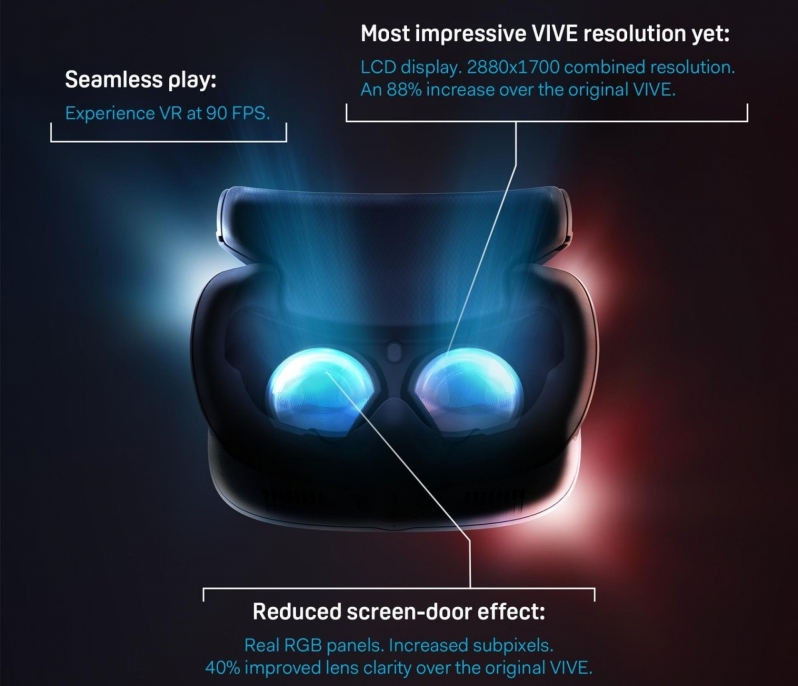 Another benefit of an inside-out tracking system is that VR setup will be made much simpler, as all sensor equipment is now contained within the headset itself. This makes transporting the Vive Cosmos easier, and initial setup a lot less stressful.

HTC also claims that their new headset is "future-proof", supporting "modular customisations" which can be used to improve the headset after launch. Right now HTC claims that development kits will be released in early 2019 and that the headset will support Steam VR. At this time the HTC Vive Cosmos has no firm release date or pricing.

You can join the discussion on HTC's Vive Cosmos VR headset on the OC3D Forums.
«Prev 1 Next»

grec
Is the name 'Cosmos' in reference to the chaos of current traditional VR setups against one that is inside-out and presumably connected via a single VR link cable?Quote

Daiyus
I really like where this is going. The inside-out tracking is something I really hope gets used more as I think it'll be a nicer set-up for what I'd like to do. I've always had half an eye on VR with the intention of one day using it to set up a dedicated sim rig (Racing and Elite Dangerous). I've never had the motivation to jump on the idea though, but I can see that day drawing closer and closer.

Plus the tiny resolution difference between my current 3440x1440 screen (4953600 pixels) and this headset (4896000 pixels) means that if I can maintain the panels 100hz refresh rate in these games it's a good indication that my rig will be up to the task of VR one day. Maybe the next time a serious upgrade option comes around it'll be a VR headset in the shortlist.Quote
Reply