HTC has officially launched their VIVE Pro "Full kit", bundling their VIVE Pro headset with SteamVR 2.0 base stations, Vive Pro (2018) controllers and everything else high-end VR gamers need to get started.

The HTC Vive Pro offers a combined display resolution of 2880x1600, which is a 78% increase in pixel count over the original HTC Vive, which was 2160x1200 over two screens. The Vive Pro headset also includes a "Hi-Res" audio solution and several comfort-oriented design tweaks that HTC's original Vive headsets lack.

This new bundle costs £1299 in the UK, with availability on HTC's Enterprise website. A cheaper package is available for £1050 which combined HTC's Vive Pro standalone headset with a Vive Accessory pack that includes SteamVR 1.0 base stations and controllers. Regardless of whatever package you go for, the HTC Vive Pro is an extremely expensive product. 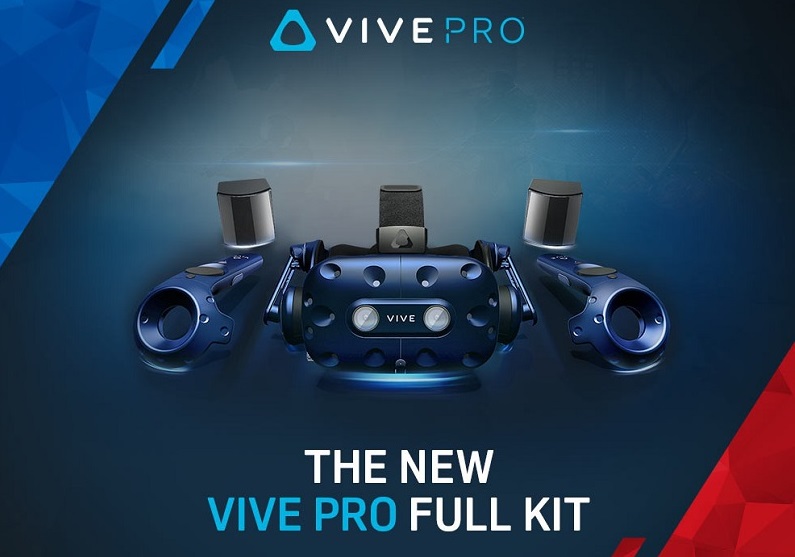 While most of the system's hardware requirements remain the same, requiring 4GB of system memory, an i5 4590 or FX 8350 CPU or better and a minimum of a GTX 1060, an RX 480 or better. From here things change significantly, with the Vive Pro moving from a USB 2.0 to a USB 3.0 requirement and from HDMI 1.4 to DisplayPort 1.2, mostly due to the headset's increased display resolution.

HTC hasn't changed their minimum GPU requirements when moving from the Vive to the Vive Pro, though the company has added a "recommended" graphics listing, which says that users should have a GTX 1070 or an RX Vega 56 or better. Users of weaker graphics hardware can still use HTC's new headset, but it will likely require users to lower the resolution of their games, which kinda defeats the purpose of this new high-end VR offering.

On the OS side, HTC has not posted their VIVE Pro with Windows 7 support, though Windows 8.1 and 10 support are listed in the system's minimum requirements, though it is noted that users should "Upgrade to Windows 10 for the best results with the dual front-facing cameras".

You can join the discussion on HTC's VIVE Pro "Full Kit" on the OC3D Forums.

The_Governour
Strange release as VR has yet not kicked off at all.... still just a gimick. Best part is the price.... but might as well go with the flow.... monitors for 2000e and gpus for 1200e etc etcQuote

WYP
Quote:
TBH I think this part is aimed at VR arcades and other professional use cases. SteamVR 2.0 is being advertised for its increased play area; a 10x10m play area isn't exactly household grade stuff.

I'd love to see the HTC Vive get a lot cheaper, perhaps see both the standard Vive and Oculus for under £300, but ATM I am finding it hard to take either headset seriously. Classic chicken and egg problem, we want more VR games before investing in headsets, and big game makers want more headsets in use by gamers.

There was a time where I almost ordered an HTC Vive, very glad I didn't. I'm not even sure what I would use it for if I owned one.Quote

Warchild
Quote:
Occulus was dropped to £280 here around Xmas time along with motion controllers.Quote

Warchild
Quote:
Yup, was bought for me as a gift. actually it was 2995 Nok what ever that converts to these days.Quote
Reply