HDR displays rely on two factors, support for a wide colour gamut and the ability to showcase extreme contrast ratios. HDR screens need to be able to present, deeper blacks, brighter highlights and a broader, more accurate range of colours to deliver the full HDR experience.

So far, only OLED monitors have been able to deliver HDR experiences to their fullest extent, with their ability to turn off individual pixel offering backs that are as deep as they can get. You can't get any darker than a pixel that's transmitting no light.

LCD-based HDR screens have a harder time achieving the same contrast levels as OLED displays, as their always-on backlights will result in some light passing through pixels, even when they are supposed to let no light through. Solutions to this have been to implement forms of "local dimming" into an LCD's backlight, but Hisense has created a new solution, one which isn't incompatible with other "local dimming" technologies.

Hisense has created what they call ULED XD, a technology which uses a 4K RGB panel and secondary greyscale 1080p panel, which sits between the primary panel and the device's LED backlight. 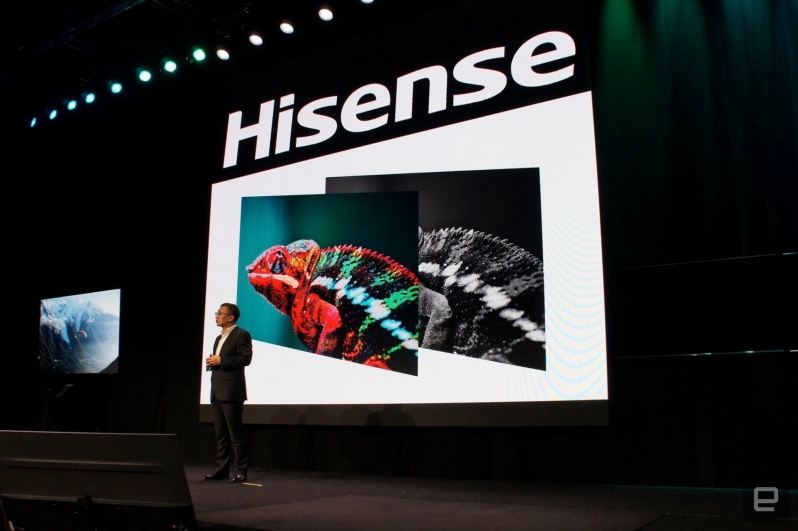 During their CES demo, Hisense commented that their ULED XD tech is cheaper to manufacture than certain other technologies, but didn't reveal any detailed pricing information for their first ULED XD screens. ULED XD screens are expected to release first in China sometime in 2019.

You can join the discussion on Hisense's ULED XD technology on the OC3D Forums.

looz
This is a serious game changer and seems like such an obvious solution now. Best of both OLED and LCD.Quote

WYP
Quote:
Well, OLED is still superior as it has the ability to turn off pixels. Hisense's solution has simply masked the problem with two pixel grids.

It is a novel solution, but I wouldn't kill off its competitors yet. There remains a lot of unknowns, such as how much this solution adds to pixel response times and other factors.

My first question is this. Does the tech behind it introduce a lot of lag? It does need to convert any image into a 1080p black/white colour map, even when using non-native resolution content.

This is definitely a cool technology, it but I won't be sold on it until those concerns are addressed.Quote

looz
Well it's certainly not an in-depth video on the tech, but Linus claimed on his CES coverage that it's perfectly fine to game on, despite additional processing required.

According to the manufacturer it's also cheaper than OLED despite the complexity.

And yeah obviously it won't kill off the competition, plain LCD will continue to be cheaper and OLED the premium choice for completely dark blacks - but it seems that this might be close enough to actual black to not matter, while being brighter and lacking burn-in issues.Quote

WYP
Quote:
It's definitely something that I look forward to seeing on a website like RTINGs, as CES showcases will typically show things in a best-case scenario.Quote