News on Navi's custom variants is coming in thick and fast, with the latest edition to AMD's custom Radeon RX 5700 lineup being Gigabyte's RX 5700 XT Gaming OC, which has just appeared at Amazon US.

The retail listing for this graphics card states that the GPU uses a Windforce 3X cooler design which incorporates five direct contact heatpipes. Additionally, this GPU is cooled using a 2.5-slot heatsink design and is powered by an 8+6-pin PCIe power configuration. 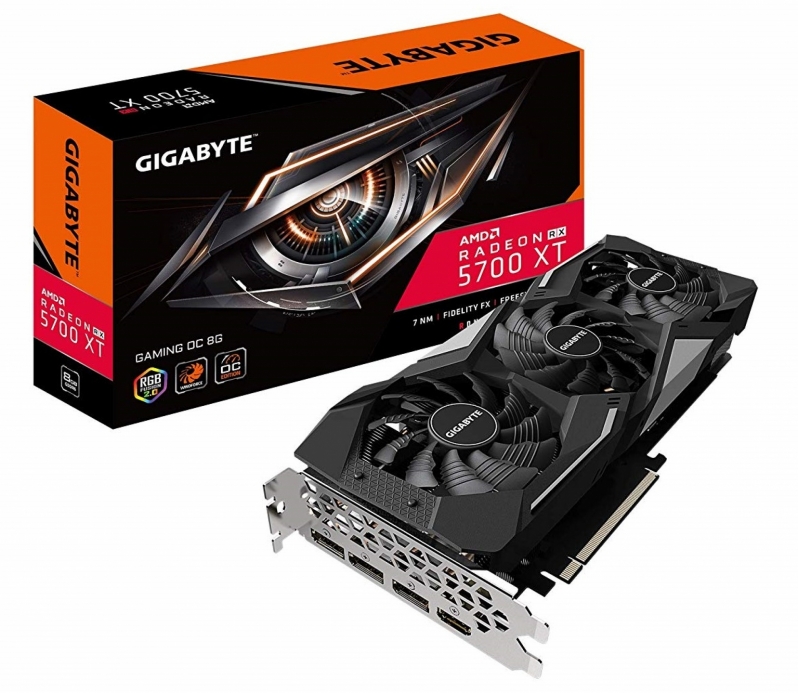 Looking at the side of this graphics card, we can see that Gigabyte's custom RX 5700 XT Gaming OC features an RGB illuminated Gigabyte logo. Moving to the rear I/O, we can see that the GPU supports three DisplayPort 1.4 connections and a single HDMI 2.0b output.

At this time the clock speeds of Gigabyte's Radeon RX 5700XT are unknown, though they are expected to be higher than AMD's reference models. Otherwise, the OC part of Gaming OC would be outright lies.

You can join the discussion on Gigabyte's Radeon RX 5700 XT Gaming OC graphics card on the OC3D Forums.

Dawelio
This uses an 2.5 slot design, the RTX 2080 variant is only an 2 slot. Does these become that hot?

This image from Gigabyte's website suggests that the RTX 2080 Gaming OC is 2.5 slot.Quote

tgrech
The 2.5slot trend is more about reducing noise than increasing maximum thermal dissipation, thinner fans are much louder for a given CFM and generate less static pressure at that CFM(So the airflow also drops off quicker with these tight non-linear airflow patterns). Having a larger heatsink also increases thermal capacity too which allows longer boosts' and a wider range & longer period of "0db mode" use now that's a thing.Quote

Dawelio
Quote:
Yeah, the OC seems to be 2.5 slot, but the non OC version is 2 slot.Quote

WYP
Quote:
I'm seeing the same coolers on both cards.

Are you sure you are not thinking of the Windforce version? Windforce is different from Gaming/Gaming OC.