This graphics card has a literal crown on it!

Galax. also known as KFA2 in Europe, has revealed their upcoming RTX 2080 Ti Hall of Fame graphics card, which will ship with the series' iconic white PCB and heatsink design with several gold-coloured elements.

With their RTX series Turing graphics cards, Galax has made their intentions clear by literally crowning their RTX 2080 Ti Hall of Fame as the king of their graphics lineup, hoping to offer some of the highest clock speeds that are available on Turing out of the box.

In the middle of the Hall of Fame's crown lies an LCD screen, which can be used to measure GPU voltage, fan speeds and GPU core temperatures, useful metrics while overclocking on a test bench or with a case with a side-panel window.

Sadly, like every custom RTX GPU maker, Galax has not revealed the final clock speeds of their RTX 2080 Ti Hall of Fame, though we can expect them to be much higher than Nvidia's reference designs and event their "overclocked" Founders Edition models. 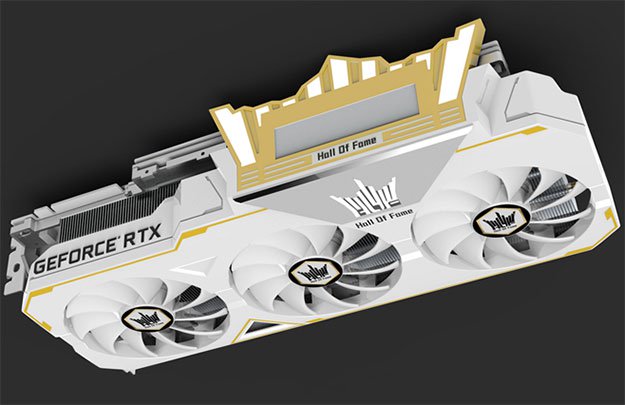 Galax's new cooler is expected to occupy 2.5 PCIe slots of space, making it an effective 3-slot card with a little wiggle room for air flow. Galax has not revealed the final pricing of their RTX 2080 Ti Hall of Fame, or when it will become available for purchase.

You can join the discussion on Galax's RTX 2080 Ti Hall of Fame graphics card on the OC3D Forums.

Wraith
You'd need to be royalty to afford one.

Dawelio
That crown is gonna mock a lot of OCD, as it’s not centered on the card lol

Warchild
they used to be so beautiful. Now they are the tackiest of all. Worse than MSI and ASUS with the RGB addiction.

g0ggles1994
Quote:
Absolutely, I nearly borked when I saw the image.Quote