Gainward has officially announced their Geforce GTX 1660 Ti series of graphics cards, with their full press release becoming available online (via Techpowerup) for all to view. This press release has revealed three GTX 1660 Ti models, two of which are branded under the Pegasus name while the third model is called the Ghost OC.

Thanks to the GTX 1660 Ti's use of more CUDA cores and Nvidia's Turing architecture, Gainward claims that their latest graphics card can offer up to 1.5x the performance of a GTX 1060 6GB, allowing Nvidia's latest graphics card to blast past the company's last-generation mid-range offering in modern titles.

The Pegasus series, which is pictured below, will come in both OC and non-OC flavours, with the OC variant offering a boost clock of 1815MHz while the standard version provides a smaller boost clock speed of 1770MHz. Both of these graphics cards are listed as having 1536 CUDA cores and as having 6GB of 6000MHz GDDR6 memory, which is 12Gbps, not 14Gbps as listed in the chart below.

Gainward's planned Ghost series is said to offer a larger dual-fan cooling solution and offer the same clock speeds as the Pegasus OC. This extra cooling potential could result in increased overclocking headroom or lower noise levels, though this remains to be seen.

All models are listed with a 120W TDP and ship with DVI-D, DisplayPort 1.4 and HDMI 2.0b outputs. All models also utilise an 8-pin PCIe power cable. 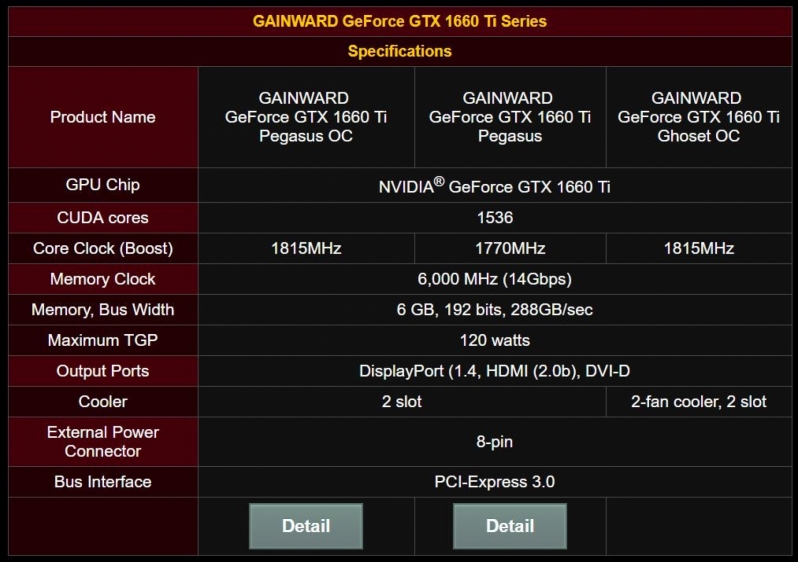 You can join the discussion on Gainward's GTX 1660 Ti series of graphics cards on the OC3D Forums.