This information leak comes via Videocardz, who managed to gain access to a review guide for the upcoming graphics card. This guide confirms that ASUS' flagship RX 5700 Strix graphics card will ship with base clock speeds that are higher than the boost clocks of AMD's reference model. Furthermore, ASUS also lists a 4.65% increase in performance over AMD's reference model in 3DMARK 11.

ASUS' review guide also confirms that their Strix cooler features a 2.7-slot heatsink design and utilises the company's new Axial-tech fans, the same fans that are used on the company's RTX 2080 Ti. The RX 5700 Stris series will offer users a BIOS switch, which will allow the GPU to run in performance mode or quiet mode depending on the user's preferences. The only difference in these BIOS files is fan speed profiles. 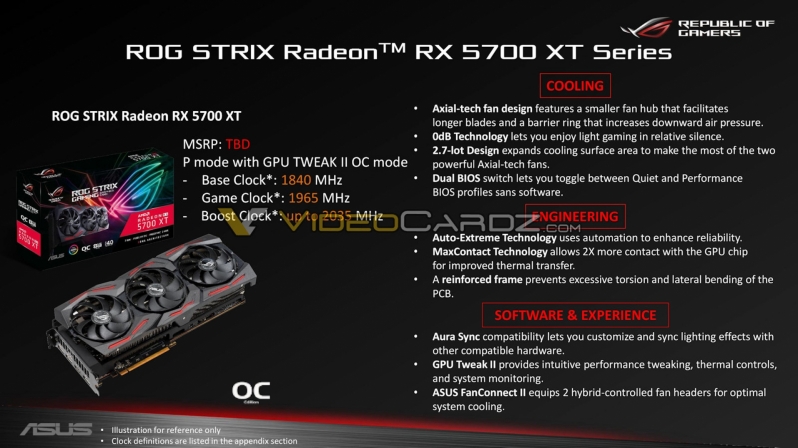 You can join the discussion on ASUS' RX 5700 XT Strix specifications on the OC3D Forums.

AlienALX
This is why they were delayed..

I was watching a Timmy Joe video the other night and he was showing how many stock variants of the card were available in stock. Madness tbh.

I would expect quite sudden price drops on these cards too. Maybe not the Strix, but yeah things should level off soon enough.Quote

Piskeante
Quote:
what i can tell you, is that blower sells are bad , really bad. and customs cards....well, if they show up with 470+, AMD will sell very little cards here in Spain.Quote

NeverBackDown
2.7 slot design seriously? What is with companies making thicker cards for cards that are consuming less power. Makes no sense to me.Quote

looz
Quote:
I don't mind as long as there are options - a 2.7slot card sounds good to me if it's near silent.Quote
Reply