4K is a strange gaming resolution, one which frankly doesn't make much sense for smaller screens. Yes, you can get 4K monitors that are as small as 24 inches, but in games screens that small it is hard to differentiate between 1440p games and 4K games, at least outside of raw performance and framerate numbers.

ASUS knows this, which is why they have created their ROG Strix XG438Q, a 43-inch DisplayHDR 600 screen which offers 90% coverage of the DCI-P3 colour space and support for local dimming and 120Hz refresh rates.

With Nvidia's announcement of VESA Adaptive Sync support, it is likely that this ROG Strix monitor will also be supported by Nvidia's hardware, though this has not been verified. Nvidia will allow PC gamers to activate Adaptive Sync support within their drivers on uncertified displays, so we will have to wait and see how well this monitor works on Geforce hardware.

This monitor is expected to use a VU type panel and offer respectable levels of HDR support with 10-bit image processing, 600 nits of peak luminance, local dimming and both FreeSync 2 HDR and VESA DisplayHDR 600 certifications. The ROG Strix XG438Q also features an anti-glare coating. 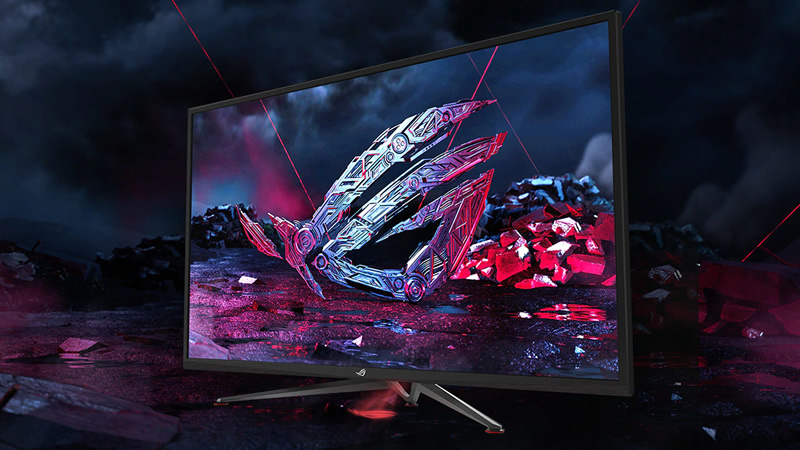 At this time ASUS has not released this monitor's pricing or a firm release timeframe, though it is expected to release sometime in Q2 2019.

You can join the discussion on ASUS' ROG XG438Q Big FREESYNC Gaming Display on the OC3D Forums.

Dicehunter
4K 120Hz and Freesync 2, Makes me wonder what Asus know about AMD's next cards

ImprovizoR
Ain't nobody got room for that!


Seriously though, I know some people do. But for me 24" to 27" is enough for a monitor.Quote

Warchild
Quote:
What plans where these exactly?Quote