Are Nvidia's partners getting desperate?

The GPU market has changed. It was not long ago that graphics cards manufacturers couldn't product GPUs fast enough, and now they are struggling to shift their products from store shelves. Today, retailers and GPU manufacturers are selling their graphics cards at reduced prices, with high-end GPUs frequently selling for prices that are far below their original MSRPs.

Last weekend, FrameChasers spotted multiple EVGA RTX 3090 Ti FTW3 models selling for $1,149 on the company's official website, pricing that is $1,000 below the company's stated MSRP. Last week, these graphics cards were being sold for $1,399 in the US.

Seeing an RTX 3090 Ti graphics card selling for $1,149 on a manufacturers official website clearly showcases how desperate Nvidia's partners must be to shift their excess RTX 30 series inventory. Remember that Nvidia's RTX 3090 Ti launched this year with a Founders Edition price of $1,999, highlighting the difference between Nvidia's official pricing and how much customers are willing to pay for Nvidia's current-generation flagship GPU. 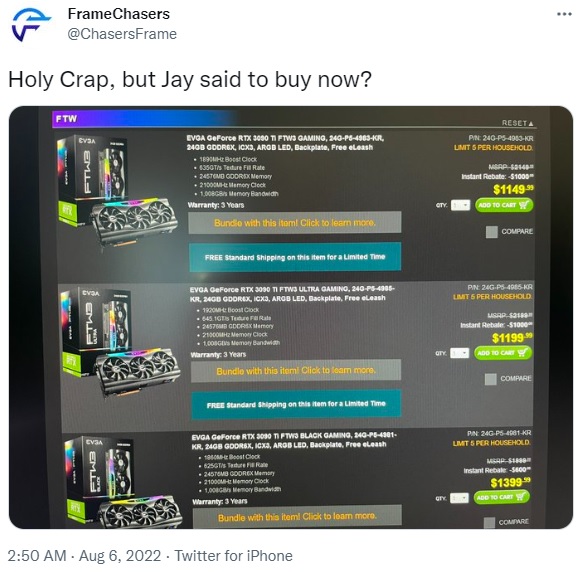 Rumour has it that Nvidia plan to launch their RTX 40 series of graphics cards later this year, and AMD has confirmed that their Radeon RX 7000 series of RDNA 3-based graphics cards will also be releasing this year. Customers know that next-generation graphics cards are on the horizon, the the collapse of the GPU mining market has made consumers unwilling to play inflated prices for gaming hardware.

GPU prices have been in free fall over the past few months, and we expect graphics card prices to continue to lower if manufacturers fail to shift their excess inventories. Will we see an RTX 3090 Ti hit $1,000 before long? I guess we will have to wait and see.

You can join the discussion on EVGA selling their RTX 3090 Ti graphics cards for $1,149 on the OC3D Forums.

AngryGoldfish
I wonder if EVGA and Nvidia still make a large profit at $1150. I'd be very interested to see the profit margins.Quote

dazbobaby
Quote:
Either they are or they aren't, if not, they're dumping stock to recover as much as they can of their losses.


I doubt they're losing money just yet. We all know GPU's have been over priced since RTX at least.Quote

AlienALX
Quote:
Laying people off so I would say negative.Quote

Avet
Quote:
It doesn't quite work like you or I would buy five cards and flip them for a profit and we need profit on every single card. At this point Nvidia have probably sold enough cards to cover RND and manufacturing costs. Now every card sold is pure profit. But every card on a shelf cost money to be on that shelf. Also new cards are coming soon. And more cards they sell more happy investors.

I remember an article about Sony's PS5. It took about a year of sales of consoles and games for PS5 to become profitable.


Edit: Remember. Nvidia recently payed truckloads of money to TMSC to book fabs upfront. Once they sell enough cards to recoup that and other costs it is all win for them. At that point you see drops in prices like this. It is better to get $1000 less for a 3090Ti then nothing and pay for the shelf space.Quote
Reply