AMD's RX 5700 series of graphics cards have arrived, and with them comes a new range of Vector series water blocks from the water cooling boffins over at EK.

As always, EK is keen to stick their water cooling technology onto the latest and greatest graphics hardware, which means that AMD's RX 5700 and RX 5700 XT reference models were undoubtedly on the company's radar. Older Radeon architectures have benefitted from the cooling that water blocks provide, with Vega offering higher clock speeds and increased overclocking headroom when paired with a capable water cooling loop.

EK has stated that water cooling can enable "10-20% better results" in games or other workloads while overclocking, at least when compared to AMD's reference cooler. 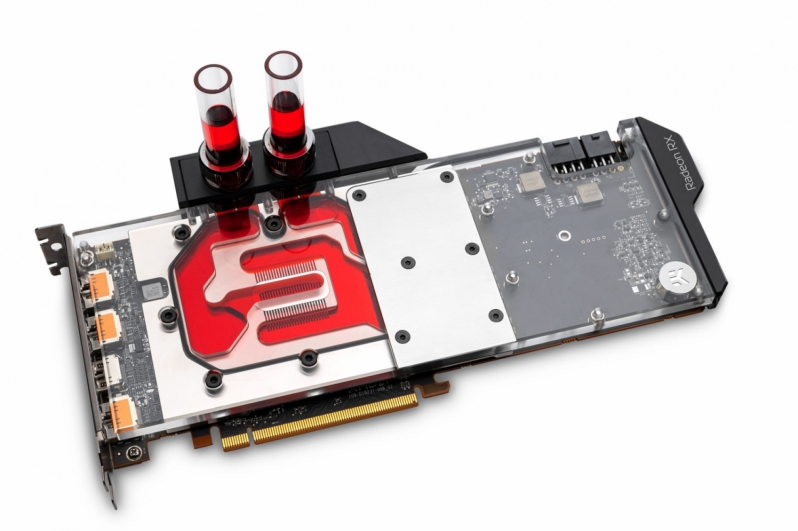 EK plans to release their Vector series RX 5700+ XT water block on July 26th, though pre-orders are currently available on the company's official website. below is the company's European pricing, which includes VAT. 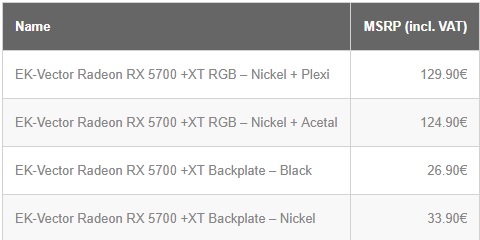 You can join the discussion on EK's Radeon Navi RX 5700 series of Vector water blocks on the OC3D Forums.

NeverBackDown
Would be really interested in seeing a review of this. Navi without thermal constraints of the stock cooler I feel like would be considerably faster.Quote

Bartacus
Looks just like the Vector block I have on my VII, nice piece.


NBD: it certainly benches faster (VII), that's for sure. HBM can be OCed too, but it's capped at 1200mhz for the memory clock OC (stock is 1000). Without that water block, hitting over 2000 on the core would have been impossible. If I recall, it's about a 2000 point difference in Time Spy between stock air and 2100mhz core/1200mhz HBM at higher voltage under water. Massive difference.Quote

Warchild
Quote:
Its a love or hate thing. EK make all their blocks look the same across all brands and models.

Personally I like that idea since I could swap to AMD and still enjoy the same beautiful blocks they produce. Others may call it lazy and lack of creativity. Suppose it also helps keep design costs down.

I have become obsessed with wanting to see a block with black nickel plating or black gloss and lit up with white lighting. Don't ask me why but i just need to see one. EK are you reading this??? hook me up

Dicehunter
Quote:
9/10 reviews I've seen have the VII as faster and quite considerably in some scenarios, Or did I misunderstand your comment ?