Each of these blocks is dedicated to a specific GPU PCB design, which means that these blocks are not cross-compatible with other RTX series graphics cards. This level of specificity allows EK to deliver optimal cooling performance for each GPU model, ensuring that their designs can maintain high overclocks for each of ASUS's RTX ROG offerings.

EK's new Vector series water blocks are made from nickel plated copper and come with a high-quality acrylic top and EPDM O-rings to ensure a long-lasting seal. Compatible backplates for these GPU water blocks are also available, adding extra passive cooling potential into the mix, shipping in black anodised and nickel plated variants. 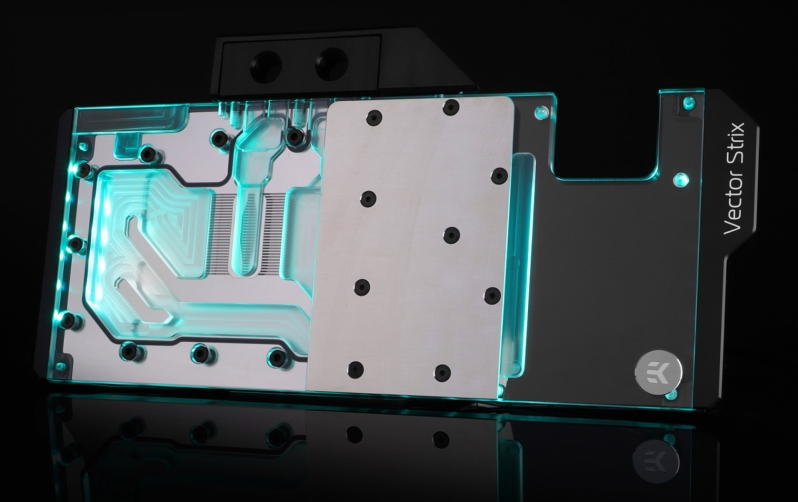 EK has confirmed that all pre-orders for their new ROG Strix series water blocks will ship on February 25th, with pre-orders being available through the EK Webshop. EK's ROG Strix Vector series water blocks are listed with an MSRP price of €154.90, and their blackplates are listed with a €39.90 and a €47.90 price tag for the anodised black and nickel plated variants respectively.

You can join the discussion on EK's RTX Vector series of ASUS ROG Strix water blocks on the OC3D Forums.

Warchild
Someone with experience of these block tear downs explain why they have that plate across the block?

There is a practical reason but I have never see it uncovered to see why it is necessary. Aesthetically it looks terrible.Quote

Eddie long
Just thinking is it because drilling that many holes across the block in close proximity would or possible increase stress on the plexi they use, so better to use a plate, just a thoughtQuote

Warchild
actually I dont think the three extra ones in the centre will cause additional stress. I was thinking more along the lines if its possible the nickel block is raised higher in areas due to caps, and then it would make the plexi thickness thinner thus prone to more stress. Could be wrong though, but its been a curiosity of mine for a long time. I have always used reference blocks.Quote
Reply