Star Citizen is easily one of the largest games ever conceived, having gained $125 Million of funding over the past 5-years and still lacking a firm release timeframe.

Kotaku has now published a report after an eight-month long investigation into Cloud Imperium Games, revealing thatStar Citizen has had a very troubled development, with a lot of bad design decisions at the early development stages and hosting stressful work environment for employees.

Cloud Imperium Games was in over its head from the get-go, with the game's original Kickstarter earning increasingly large sums of money and the studio head, Chris Roberts, promising a game which only increased in scale as time went on.  During the Kickstarter campaign, it has been claimed that Chris Roberts had no real plans on how to deliver on his huge promises, with the company relying heavily on 3rd party contractors during early development and suffering from a lot of communication issues and delays as the game grew in size. 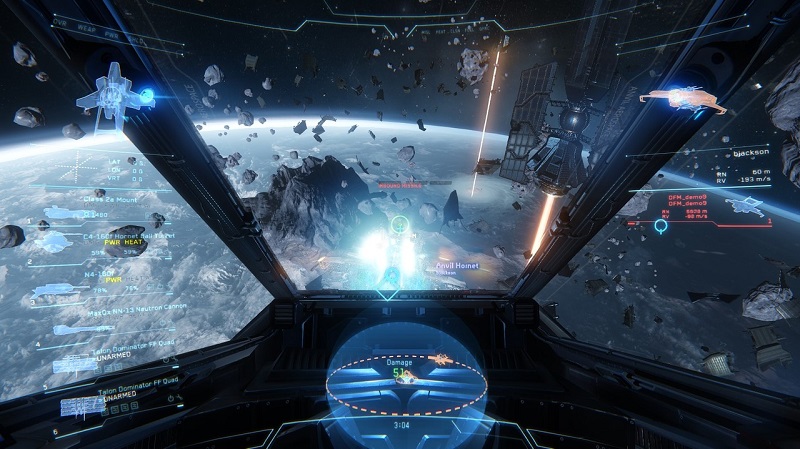 Star Citizen is currently being developed using CryEngine, with this choice being primarily due to the relative maturity of CryEngine when compared to Unreal Engine 4. Due to Star Citizen's unique scale, CryEngine had to be extensively modified to suit Star Citizen, which when combined with the difficulty finding employees that were familiar with the Engine made Star Citizen's development slow early on.

It was also decided that Cloud Imperium would also create an entirely new first-person system within CryEngine, despite the fact that CryEngine was designed primarily for FPS games, requiring a lot more costly design work and development time. While this eventually resulted in Star Citizen having both 1st person and 3rd person views, it has been described as "a stupid, stupid decision" by a Foundry 42 employee.

In 2014 Cloud Imperium Games did take on a lot of former Crytek UK employees, with Crytek UK having difficulties paying staff at the time. This influx of new talent did help make a lot of development progress, but the issues didn't end there.

The report goes on to detail communication issues with several different studios and a lot of issues when it came to collaborating with the 5 total development studios that are working on the game. The full report can be read at Kotaku UK.

You can join the discussion on Star Citizen's development troubles on the OC3D Forums.

Dark NighT
Smells like another clickbait attempt, the studio isn't even in full development for 4 years, heck we not even at the 4 year mark for its original crowdfund campaign, and it took them a long time to get rolling on actual development.

either way, every studio has its issues, but because this game has such a crowdfunding and a few very bitter people attached to it, its suddenly super important?

Not being overly defensive, yeah they made some dumb decisions as well, but i still believe they can make one hell of a game here.Quote

NeverBackDown
Quote:
That's the point though. Dumb decisions. It's delayed the game. No one doubts it'll be great, it's just taking an obscene amount of time and probably more money than it shouldQuote

SeekaX
Quote:
Four years isn't a short time span, not even with a project like this one, especially with the funding they have. ED started around the same time.
Personally i lost all faith in the project years ago, simply because they focus on the wrong things. The dev team is incredibly cringy and the community unreasonable, just a matter of time till it all comes crashing down.Quote

mdavidat
Quote:
Let me compare it to Mass Effect: Andromeda which is in development since about the same time as Star Citizen. ME:A is scheduled for Q1 2017 after it got delayed. SC does not have a date yet and that is no shocker to me. Bioware has had 2 big studios in Edmonton and Montreal working almost exclusively on it since 2012. Star Citizen at that time had a development team of about 15 people and it took them more than 2 years to get to a number where it can be compared to other AAA studios. Just think about that for a moment and don't just compare what kind of financial support they have received.

SeekaX
Quote:
Your justification for how long Star Citizen is taking is comparing it to another game which was delayed? It's a completely different genre as well, Mass Effect needs far more art development than SC and that takes time. If i remember correctly the release date was originally scheduled for 2015, then moved to 2016 and now it's looking like 2017 is unlikely, despite their funding constantly increasing. If they can't stick with a schedule with $120m in funding they created with ~$15m in funding that makes me wonder what the original plan was or if there even was one. I've compared it to Elite Dangerous which is at least in the same genre. It has less funding, started slightly later, to be fair a little less ambitious maybe, but that game had proper builds out for two years now. Star Citizen also got funded in 2012, in 2013 they definitely had far more than 15 developers. I'm very well aware that games are considerably longer in development than they get advertised, but SC is definitely off pace. Their planning is a mess which is why they haven't been able to meet a single planned release date since the hangar, i don't know why anyone would deny that.Quote
Reply