AMD's Radeon RX 5000M series processors are a gamechanger for AMD, allowing them to challenge Nvidia within the low-power graphics space, something which was impossible with its Polaris and Vega series graphics cards.

The Radeon RDNA architecture offers AMD the performance and power efficiency they need to become successful in this space, with mobile Radeon 5000 series RDNA graphics hardware having already found itself within Apple's latest MacBook devices.

Now, Notebook Check has been able to get a look at some performance numbers for AMD's mobile Radeon RX 5300M processor, revealing performance numbers which surpass Nvidia's GTX 1650. If this holds true for real-life gaming applications, and not just 3DMARK, AMD's onto a winner with RDNA.

In the chart below, AMD's RX 5300M can deliver performance levels that are 11% higher than Nvidia's mobile GTX 1650, which is great news for laptop gamers. The 5300M is also only 14% behind AMD's Radeon RX 5500M, making it a great mid-point between these Radeon and Geforce mobile parts.

The only downside of AMD's RX 5300M graphics chip is its use of 3GB of GDDR6 memory, which isn't much by today's standards. While the GPU's use of GDDR6 memory ensures that it has enough bandwidth for 1080p gaming, its 3GB allocation of memory may be too small for some future games. 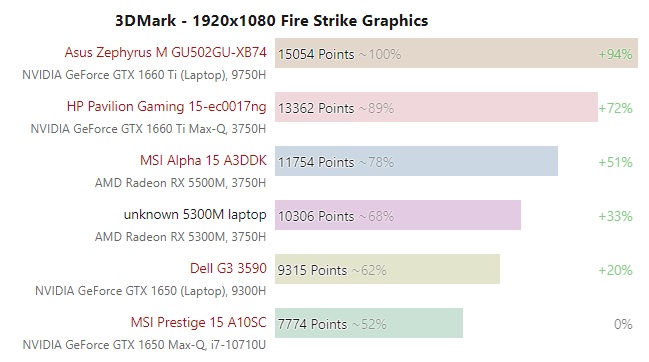 AMD's RDNA architecture was a huge step forward for AMD, and the benefits of AMD's latest architecture is felt the most within the mobile market, where Nvidia has been dominant for several hardware generations.

You can join the discussion on AMD's mobile RX 5300M graphics card beating Nvidia's GTX 1650 in early benchmarks on the OC3D Forums.