EA and Dice have released all new screenshots and information about their upcoming game Star Wars Battlefront, which will have an open Beta in October offering 3 modes of play.

The 3 modes; Walker Assault, Survival Mission and Drop Zone will all be present in the in open beta across several different maps/ locations. Right now no other information is known about the beta.

Star Wars Battlefront's newly announced game more, Drop Zone, will center around capturing drop pods which drop from the sky. These drop pods will act as command/ control points and the team which successfully captures the most drop podw within the match time limit expires wins.

This new mode will rely on quick thinking, fast movement and defending a location from attacking enemies.

“This goes hand in hand with our design philosophy behind many of the game modes in Star Wars Battlefront,” Lead Level Designer  “We’re promoting the idea of a fast, action-packed game where you need to be mobile and think on your feet. Camping doesn't really pay off.”

Dice has said that they have placed a lot of effort into designing the game's many maps,  allowing the game to be fun and engaging regardless of which game mode is played.

“Playing Drop Zone on the Swamp Crash Site on Endor is a personal favorite. The map has a couple of nice choke points but is overall very free-flowing and hectic, as enemies can attack from anywhere on that level,”
“The fight takes place around a crashed GR-75 transport ship with containers from the craft strewn across the landscape, and there’s one section with a waterfall overlooked by an Ewok village, where you have to jump down into the pool below in order to claim the pod, hoping no one’s hiding in the trees above waiting to pick you off.” 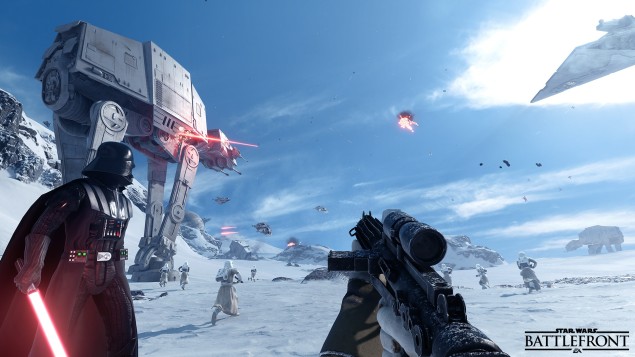 Star Wars Battlefront will release on PC, PS4 and Xbox One on November 19 2015. Right no information is available for the PC's minimum and recommended requirements, but these are expected within the coming weeks .

You can join the discussion on Star Wars Battlefront's Drop Zone mode on the OC3D Forums.

now to buy the gameQuote

B NEGATIVE
Has EA detailed how they are going to ruin it yet?Quote

TPC
Quote:
No server browser like on BF3/4. No custom servers.
Means no fun with your friends on an empty server or easteregg huntin which was a huge thing in BF4 and no machinima making since you will always be put into a public server which isnt empty. But I think its more Disneys fault because they want to have full control over their franchise.Quote
Reply