Would Ray Tracing see wider adoption if DXR-compliant hardware was more readily available? Want to see how fast Pascal is at Ray Tracing? Do you just want to avoid Nvidia's RT cores? Good news, Nvidia has confirmed that they are bringing DXR support to Pascal and GTX Turing series graphics cards.

How? Doesn't Ray Tracing need RT cores? No, DXR Ray Tracing has a direct compute mode, with Nvidia's RT cores only serving to accelerate the workload. DXR could work on and DirectX 12 compliant graphics card, but until now Nvidia has kept DXR support behind their RTX lineup.

Since the release of their RTX series Nvidia has realised something, something simple. DXR could see wider adoption if more graphics cards supported the technology, and the only way to truly understand the benefits of the company's RT cores is to see how games with Ray Tracing perform without them. It's a simple move, but a masterstroke for the company.

Now, tens of millions of DXR capable graphics cards are in the wild, with support coming via a driver update sometime in April. This will allow more game developers to experiment with DXR and potentially allow DXR to be utilised across a broader range of gaming titles. At this time it is unknown if AMD plans to follow suit and enable DXR support with a future Radeon Software Adrenalin release. 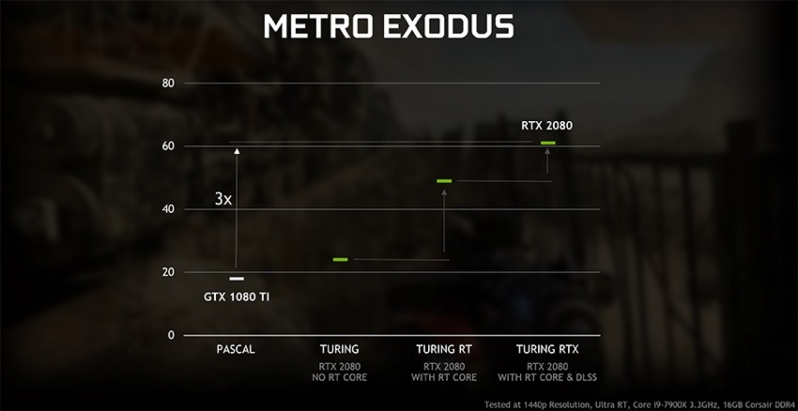 Moving forward, Nvidia hopes to see Ray Tracing be supported by a wider variety of games, engines and APIs, with support coming to the Vulkan API via extensions in the near future.

Nvidia's DXR driver is coming for Pascal and GTX Turing GPUs in April, with support being given to GTX 1060 6GB graphics cards and over.

More information about this is available on Nvidia's website.

You can join the discussion on Nvidia's plans to add DXR support to Pascal and GTX Turing GPUs on the OC3D Forums.

kully1972
This hopefully drives the tech to more developers and the performance impact will be interesting though.
Maybe my 1080ti can equate to a rtx 2070 with raytracing on!Quote

AlienALX
Lmao when all else fails...Quote

Tolemac
If I would have bought a Turing card, I would be spitting feathers at this newsQuote

tgrech
While it depends a lot on the implementation I think Pascal's 1.5x to 3x hit in games so far from enabling DXR means it's still kinda useless below a 1080Ti besides demonstrating to people why they didn't open it up originally, at least until games start implementing lighter and lighter DXR implementations which to be fair should come as the tech matures and people work out where the "bang for buck" lies in terms of visual impact vs performance impact, but then that will also come alongside making somewhat better use of the high resource raytracing elements so there will presumably still be a pretty clear gap in the type and amount of effects that are capable on accelerated hardware.

I think this also makes it pretty likely AMD went the route of making their shaders better at the compute workloads used in these semi-software based DXR layers as opposed to creating dedicated execution units for it, really they had to wait until the tech matured somewhat and lighter implementations started to come until that was a viable route(And I wouldn't be mega surprised if Navi launched with these features coming later in a driver update, Radeon VII now has reasonably well accelerated DXR fallback layer support but its clear work still needs to be done on the software side).Quote

AlienALX
Quote:
It would be nice,for once, for a GPU to be pushed to its absolute limit before its tossed in the bin. RT, imo, should be learning to walk before it runs. If Pascal can do RT it should do it for as long as it can before it's literally on its proverbial knees.

But it never happens.

The XBOX 360 was pushed beyond its limits right til the very end. Would be nice if pc hardware was like that.Quote
Reply