Do capacitors make much of a difference?

While Nvidia's RTX 3080 "Cap Drama" has been solved thanks to the company's Geforce 456.55 drivers, that doesn't mean that there isn't a mystery to solve regarding capacitors and their ability to improve overclocking and GPU stability.

The world-class overclocker der8auer has put Nvidia's "cap drama" to the test with Gigabyte's RTX 3090 Gaming OC to see if MLCC capacitors would make his graphics card more stable whilst overclocking.

Credit where credit is due, this testing requires top-level soldering skills and balls of steel. Not only has der8auer taken a soldering iron to Nvidia's most expensive consumer-grade Ampere graphics card, but he has also soldered 20 of the tiniest capacitors to the most densely packed area of the graphics card's PCB. Now that's talent. 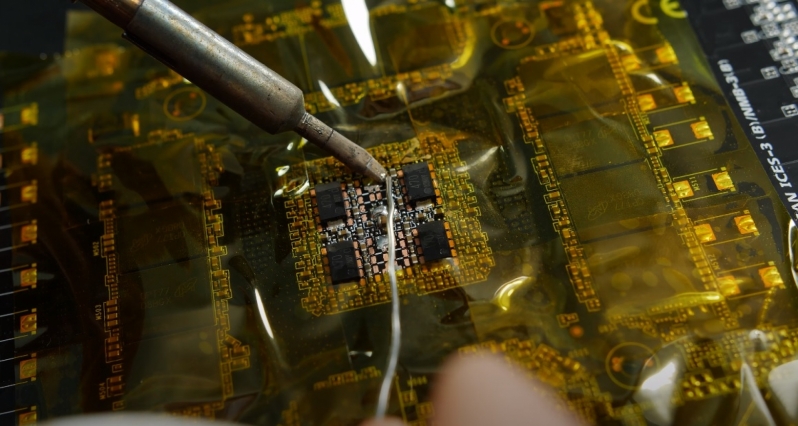 (Some crazy soldering from der8auer)

After replacing two of Gigabyte's stock 470u CP-CAP capacitors with twenty 47u MLCC capacitors (given the capacitor setups the same power capacity), der8auer found that he was able to change is maximum stable overclock from +70 MHz withing OC Tweak to +100MHz without crashing or instability. That's an increase of 30MHz in software, which at speeds of around 1900MHz represents an increase of less than 2%.

der8auer also tested his RTX 3090 without central capacitors and found that his graphics card would crash within a minute of a custom 3DMARK Time Spy stress test. Given this fact, it is clear that capacitors are a vital part of Nvidia's RTX 3080/3090 series graphics cards.

So did MLCC capacitors help? Yes, but only by a marginal amount. Note that der8auer wasn't testing stability at stock settings, he was testing the maximum overclocking potential of his RTX 3090 graphics card, and even then he was only able to achieve marginal performance gains.

Below is der8auer's excellent video on Nvidia's "Cap-Drama", which appears to have been created/filmed before the release of Nvidia's stability boosting Geforce 456.55 drivers.

It's worth noting that all crashes shown within der8auer's video followed large spikes in GPU boost clocks, which saw Gigabyte's RTX 3090 spike from speeds of around 1900MHz to 2055-2100MHz.

In our own RTX 30 series testing, we have also found Nvidia's GPU boost technology to exhibit overly spiky behaviour, which appears to be the cause of reported RTX 30 series stability issues. Even before launch, Nvidia hardware partners told us that they expected Nvidia to release a new driver to increase RTX 30 series stability; this driver is Nvidia's Geforce 456.55 driver. Nvidia's 456.55 driver appears to remove these large clock speed spikes to allow the power circuitry on their graphics cards to better react to varying workloads, placing less strain on GPU capacitors in the process.

We hypothesise that Nvidia's pre-release and day-1 RTX 3080/3090 drivers had problems with GPU boost, causing large GPU clock speed spikes with would drain the energy within capacitors before the VRMs could react. This type of fault explains why graphics cards with stronger capacitors were less prone to crashing, and how Nvidia could address its RTX 3080/3090 stability concerns with new drivers.

While capacitors were part of the problem, the root of the issue appears to lie with Nvidia's drivers. Thankfully, this means that no RTX 3080 graphics cards should need to be recalled over Nvidia's capacitor controversy. The problem was with software, not hardware.

You can join the discussion on der8auer putting Nvidia's "Cap Drama" controversy to the test on the OC3D Forums.
«Prev 1 Next»

Dicehunter
I have a fix for all of this, It will annoy the overclockers but through a vbios update put a cap on all cards to a max clock of 1900MHz, This gives all manufacturers a very decent safety buffer and way less RMA's, Issues etc... plus it's not like that extra 100MHz will make or break anything in a game or application.Quote

trawetSluaP
Quote:
That's not needed now the issue has been fixed via drivers.

In fact, it seems most users are seeing higher clock speeds as a result of the extra stability providing a higher overall held clock speed.Quote

TheF34RChannel
That dude has got nerves of steel doing what he does - thumbs up!Quote
Reply