AIB cards are unlikely to be available near launch.

AMD's Radeon RX 5700 and RX 5700 XT are set to launch on July 7th (7/7) but unfortunately, it looks like team AMD will only be able to sell their reference-style graphics cards on launch day, with custom variants coming much later.

Fudzilla claims that they have sourced which place the release of custom/partner cards in mid-August, making AMD's Navi launch reference-only for what's likely to be over a month, after which custom designs will likely arrive from ASUS, MSI, Sapphire and AMD's other add-in board (AIB) partners.

This means that early Navi users will have to stick to AMD's reference blower cooling solution, which will undoubtedly be seen as a bad thing in the eyes of consumers. At launch, the largest customisations that consumers are likely to see are a change in boxart and the addition of a branded sticker to your graphics card, as is common for launch day products.

While Navi is touted for being much more efficient than both Polaris and Vega, AMD's use of a blower-style cooling solution will be seen as a downside for many, but thankfully the cooler seems very similar to what is used with the RX Vega 56/64. Given the increased efficiency of Navi, an RX Vega-like cooling solution will likely require slower fan speeds to keep Navi cool, which is good news for consumers. 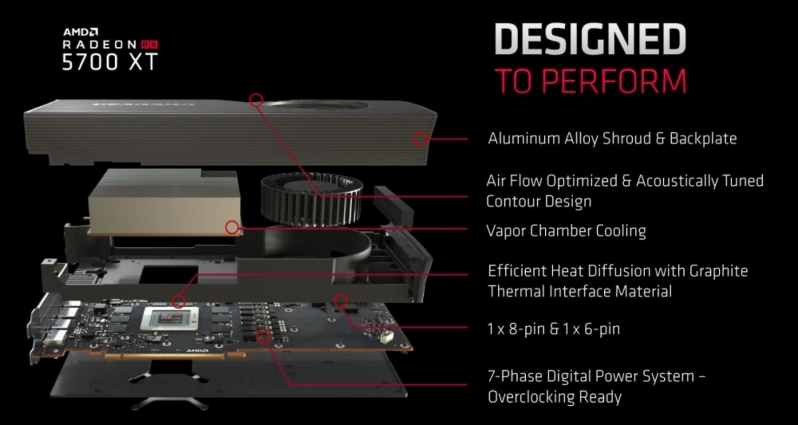 AMD is likely to discuss custom Radeon Navi graphics cards during or after the RX 5700 series' launch on July 7th, though we should expect to see models from the likes of Sapphire, ASUS, Gigabyte, ASRock and MSI before the end of the summer.

You can join the discussion on AMD's Radeon Navi RX 5700 series of graphics cards on the OC3D Forums.