Over the past 20 years, GPUs have transformed to become a lot more than mere chips on a PCB. Modern graphics cards could be seen as art pieces, thanks to the stylistic preferences of today's PC builders, and the cooling requirements of modern hardware have created engineering challenges that go outside of the realms of silicon design and electrical engineering.

Before revealing their latest products on September 1st, Nvidia is celebrating the engineering efforts behind their GPU heatsinks, teasing the future of their Geforce Founders Edition lineup while highlighting the design aspects of their past and current product offerings.

When looking ahead, Nvidia's Thermal Architect David Haley says that "we have to remove the constraints that we had before". With Nvidia's future products, Haley says that  "you have to change the PCB, we have to move the fans, and we need to change the software stack that's controlling the fans." With Nvidia's next-generation products, the company's thermal design will change, and so will their power circuitry.

Making a powerful graphics card relies on more than silicon design: it also depends on thermal dynamics, electrical design and mechanical engineering. With their future RTX products, Nvidia's taking a "holistic approach" to GPU design, creating new products from the ground up to meet the needs of consumers. To do this Nvidia need to break established design rules, as this enables Nvidia's Founders Edition GPUs to offer revolutionary design aspects.

In the video above, Nvidia has revealed its compact 12-pin power connector, which allows Nvidia to push more power into their graphics cards using a smaller connection. This change allows Nvidia to free-up PCB space and to simplify their power management systems.

Nvidia has confirmed that their 12-pin power connectors will be compatible with 8-pin PCIe power cables using supplied adapters, which means that Nvidia users will not need to purchase a new power supply to support Nvidia's next-generation products.

In the video above, Nvidia offers gamers glimpse at some of the strides that the company has made when designing their next-generation graphics cards. These changes are designed to allow Nvidia to reach their maximum potential and remain cool and quiet. These design aspects include:

Mechanical: A stronger mechanical structure, including a new low profile leaf spring that leaves room for a back cover.

Electrical: A compact electrical design, with a new 12-pin power connector that allows more space for components and cooling, and is compatible with 8-pin connectors in existing power supplies with an included adapter.

Product Design: A no-compromise, cohesive design that embraces the revolutionary thermal solution while beautifully harmonizing each element of the graphics card. 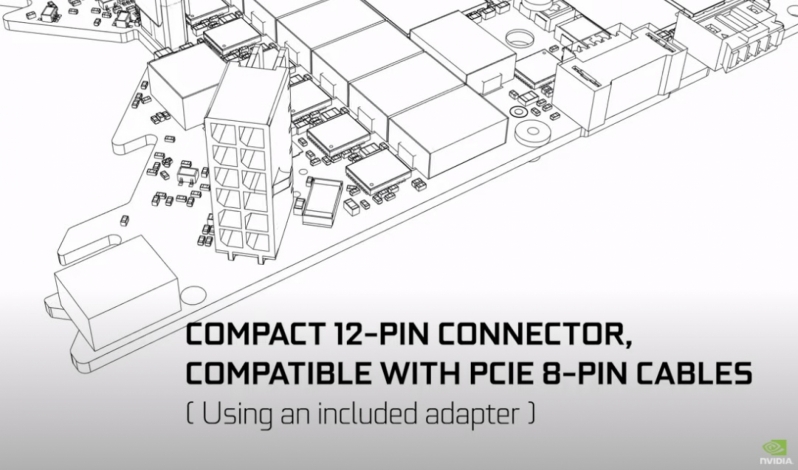 You can join the discussion on Nvidia's future RTX series Founders Edition graphics cards on the OC3D Forums.