The R600 range have a new type of Anti-Aliasing called Custom Filter Anti-Aliasing (CFAA), featuring edge detect, narrow tent & wide tent filters to reduce texture shimming. Along with higher compression ratios for Multi-Sample Anti-Aliasing (MSAA).
The way CFAA works is different to the standard MSAA in that instead of using a box/grid to divide the screen and having samples taken from inside these boxes it uses an array of larger circular areas which allow overlapping and also better coverage.

CFAA supports programmable sample patterns & filters. It is also upgradable with driver updates which is one of the reasons why we could see some improvements in performance with each driver update. 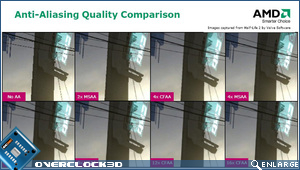 It's worth noting that ATi's new implementation CFAA has quite a few good points to it (such as speeding up per-pixel samples on limited memory), but this technique could lead to actually a blurring of the image, rather than a sharpening and reducing jaggies. nVidia's implementation here shows it's strengths with a more precise implementation in it's QAA.

This is another advance in 3D hardware that was developed on the xbox360's GPU. Tesselation makes it easier for developers by creating a means of hardware smoothing. This means developers can have something which might look coarse and even not very detailed, the GPU will then do most of the work. The end product looks much more detailed and life-like. This also obviously works for terrains and helps in animation, converting primitive data into something beautifull. 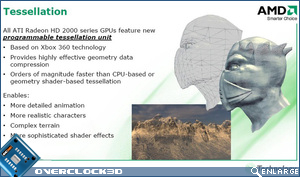 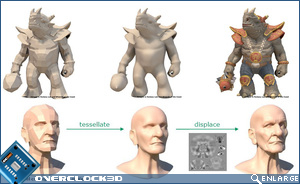 As mentioned earlier the Radeon 2900XT has the worlds first 512-bit memory interface, giving it a huge bandwidth boost. When comparing it to the X1900XT for example the 2900XT has over 2x the bandwidth (X1900XT 46.4GB/second) 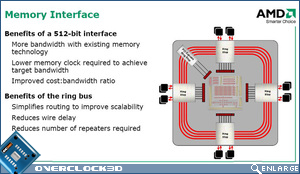 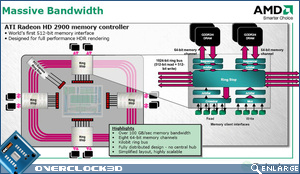 ATI have talked about the ring-bus architecture before, but this time they've given their card 512 bits to play with - a worlds first. The ring-bus is a bi-directional approach to memory architecture meaning the data gets to where it needs to go by the shortest route, making it highly efficient. It's all about bandwidth here, and that's what GPU's really benefit from.
«Prev 1 2 3 4 5 Next»

FarFarAway
Great work mate. Nice and simple and easy to understand while getting the key points across

Hope everyone enjoys reading it

Toxcity
Good work on your first write up matey!

Once again I cannot wait for the view, equk.. are you doing the review too?Quote

FarFarAway
No I'm doing that

Suprise suprise.. Kemp always gets his hands on the best stuff!

Good on ya mate!Quote
Reply